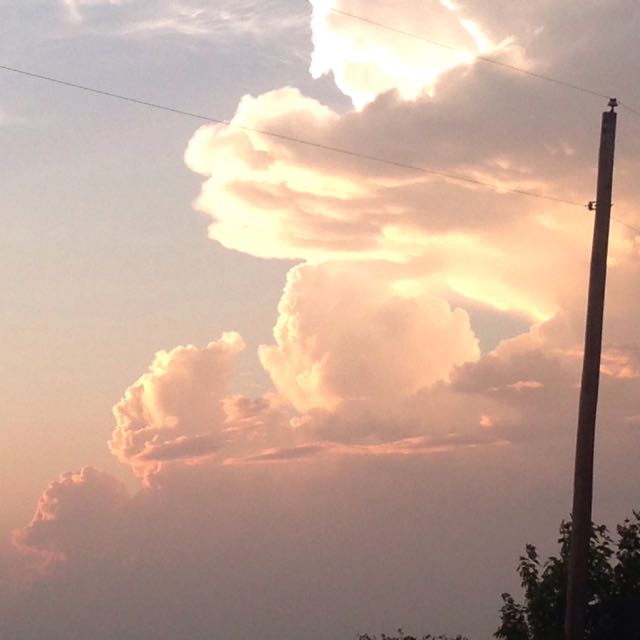 By Katie Andraski August 21, 2015 Reflections on the ground, Spirituality
2 Comments

The End of July

We were watching junk TV, a guilty pleasure I look forward to every Monday night. During a commercial break I walked out to check on the horses and saw the most amazing clouds to the south. They were rolled over each other and then swept up at the top, upper level winds streaking them across the sky. I called Bruce out of the house to come see because you couldn’t see this from our windows.

Glory, I kept thinking Glory and the scene from Revelation where the twenty four elders fall to their noses when the four living creatures sing, “You are worthy, our Lord and God, to receive glory and honour and power, for you created all things, and by your will they were created and have their being.”

We stood together looking to the south, the clouds rolled over onto themselves like giant air currents and dipped a spatula underneath and folded them. Then we walked to the road to get a clear view of the horizon. The clouds bubbled up to the north, and pushed off in anvils that made me think of hymns, driving my arms into the air, even though I am no charismatic. And the sky was clear to the west, and overhead. The storms had parted, gone south and gone north. I’d never seen storm clouds like this, so rounded, as if they’d come from another place, as if they’d come from God himself–God speaking out of the whirlwind.

But right down the middle, was the pastoral scene we always see—our neighbor’s beans starting to sprout, the train tracks threading between farms, Dale Rode’s red barns on the lip of the valley, grain bins and a house across the way, white roofs, trees rising like mounds of an island off the coast of Maine. The sun dropped behind a broken up storm, it’s magenta light pouring around the fragments.

But oh my, the beauty of the clouds sweeping to the north and to the south. We watched jets fly towards the huge towers, headed, we presumed, to O’Hare. We know pilots avoid those storms, so we figured it was an optical illusion, that the storm had to be miles away from the jetliner.

And these storms were strangely silent. The storm to the north eased down our way, so we were clipped by the edges. But these days a storm can be overhead, flashing lightning and you hear no thunder.

Ever since we moved to the farm,  I haven’t been afraid, maybe because this house has been alive for a hundred years, is built solid.  I used to be terrified of storms, teeth hurting terrified, especially as a little girl. I used to be terrified of God. I wanted to see him like Moses or Isaiah or Daniel or John the Beloved, but shuddered with the thought God might take me up on that desire. I’ve been terrified of the moment I’d stand before him, the books opened, and all the things I’ve done brought to light. And terrified of my husband, not because he is a person to be afraid of, but afraid of his love, afraid of losing him.

Here’s a poem I wrote about this:

This terror before my husband is the terror

in a thunderstorm when there is nothing

protecting me and my house but the luck

of the lightning stroke. I taste it.

My horses in the barn would have no chance

against straw in flame and locked fear.

I sit the farthest inside my house. The windows

are silver with rain so hard I can’t see

the cedars, willow, lilac a few yards off.

I sit with a Bible open to First John

where it says God is love and perfect love

casts off fear. But God is so raw in the sudden thunder,

I must sit in terror until the storm moves east.

With my husband I freeze as the child I was

and kiss with fear scuddling along my teeth.

God is raw when we come to love a man

who could die quick as lightning. But sun

does break up the storm, horses still stand

in the barn, waiting for pasture. One apple

tree down that my parents left to be an arbor

for bittersweet I picked for centerpieces.

I still am afraid of judgement  but I am coming to understand in my bones the promise that when we stand in judgment we won’t be condemned. I remember a college friend calling me up to his chair after chapel. He pointed to this verse and said, “commended” not “condemned”. Commended.

“But with me it is a very small thing that I should be judged by you or by any human court. I do not even judge myself. 4I am not aware of anything against myself, but I am not thereby acquitted. It is the Lord who judges me. 5Therefore do not pronounce judgement before the time, before the Lord comes, who will bring to light the things now hidden in darkness and will disclose the purposes of the heart. Then each one will receive commendation from God” (I Cor 4:3 -5 NRSV). Not condemned. Commended.

I’m not sure I know what to make of my building trust. If a storm is truly dangerous, like the EF 4 tornado that smashed Fairdale and part of Rochelle, I know enough to get a racing heart, but even then Bruce and I bounced from the basement to the road to the front window to see the whirlwind, to see if God might speak. Seeing a tornado has been on my bucket list, and that day I saw three. And my friends, my friends on Facebook dinged they were praying when I posted it was headed our way. But the storm turned north, fizzled a mile away, blowing up a barn but not the house or milking parlor.

There are some Christians who hold fast to the idea of a wrathful, terrifying God, but I’m not sure that brings us to the deep trust, the trust that steps on the board over a rushing current, that God begs us to have. I think God avenges the child taken in sex trafficking, or the older couple beaten within an inch of their lives, or the baby caught in street gang crossfire. He avenges the person who lost their home because they were tricked into a loan they couldn’t pay, and the young person who is drowning in a student loan she can’t pay back.

There are some Christians who seem to delight in the fact that people will burn in Hell—eternal conscious torment. What a relief, your hated enemy, burns forever, your bitterness finds justice. But doesn’t that leave you stuck with your bitterness? Doesn’t it justify your hatred? After all, God Himself has tossed your enemy into the fire. But doesn’t he tell us to forgive us our trespasses as we forgive those who trespass against us?

But what if it’s fire we long for, fire cleaning us up, pulling us into the presence of the God who is a consuming fire? What if the notion your enemy in this life will be the person seated next to you at The Great Party when the Kingdom comes? Wouldn’t that be motivation enough to make peace as much as possible here? Wouldn’t this belief nudge us towards blessing our enemy if that’s all we can do? And if God redeems everyone, cleans us all up, then why not live as though that were happening now? As though the Kingdom were here now?

In one of the great storm stories, Jesus tells his disciples to steer the boat to the other side of the lake. He is so exhausted he falls asleep. We all know the story. The storm comes up, the disciples wake him and he quietly calms the wind and the water. Peace. Be. Still, he says.

But do you know where he was headed? To a demon possessed man, a man so possessed that it took 2,000 pigs to house them when Jesus kicked them out of the man. He ran naked through a grave yard, way too strong for chains to bind him, a real spook story. (If the storm scared the disciples, I wonder how much more terrified they were when they saw the man.) Those demons asked for mercy and Jesus himself gave it, but it was the pigs, the honest animal nature of God’s good creation that destroyed their place in living, breathing bodies, by diving off a cliff into the sea. It was the people that asked Jesus to leave and the cleaned up man wanted to follow him, but Jesus told him to tell his story, right there with his own community.

Then Jesus climbed in the boat and went back to His people.