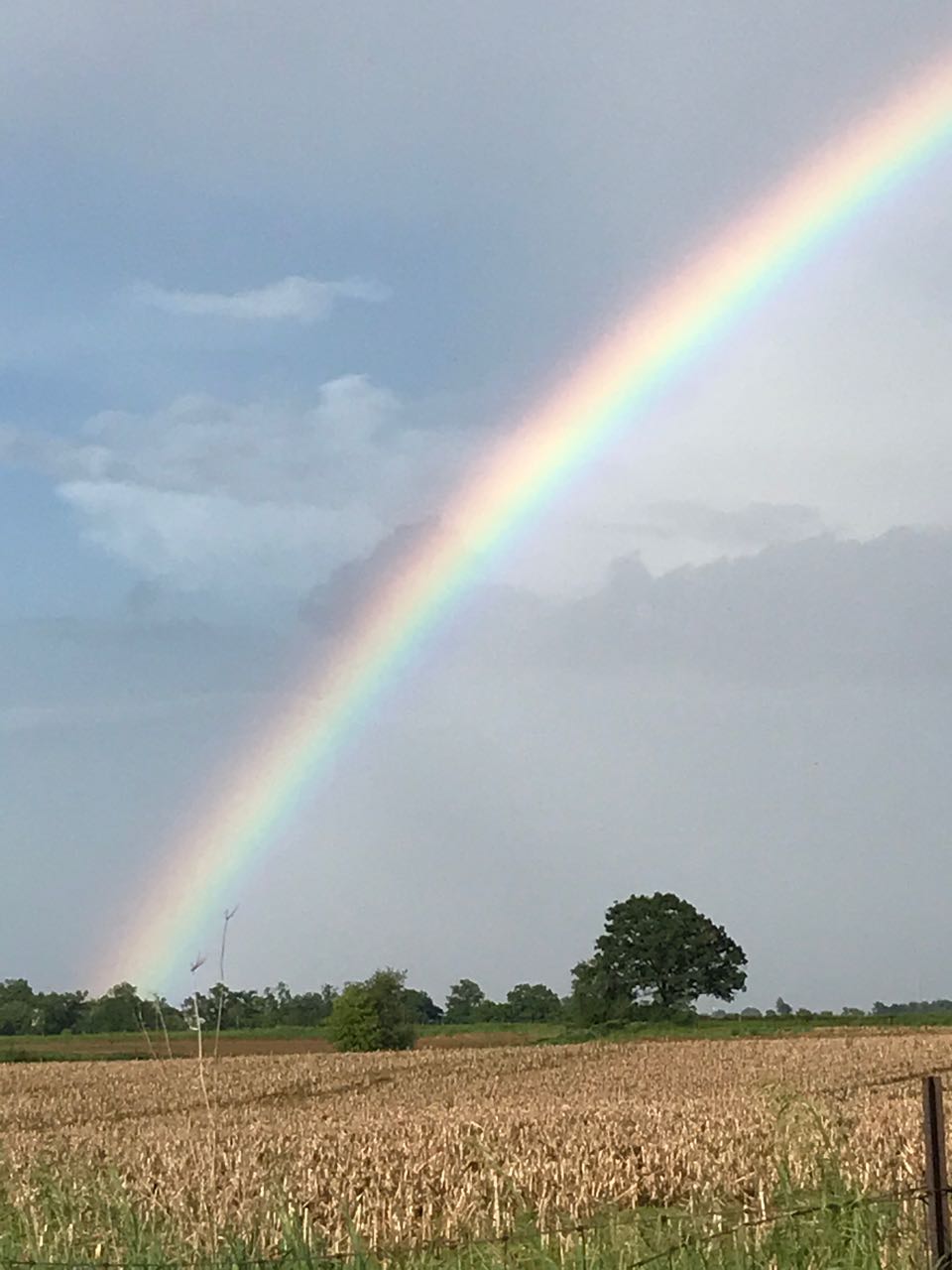 Listen to the Trees WNIJ Perspective

Do you ever notice the trees in your life—the ones you look to without thinking? When I was a girl, I’d look to the white pines that bordered our road. They reminded me of great kings and queens. I’d look to them when my dad’s headlights flashed a mile away.

Nowadays there’s an oak I look to in the corner of Peterson’s field. Its branches tilt as though a south wind permanently blows. It catches light, especially the golden light the sun throws at slate storm clouds. Sometimes a rainbow.

We have an elm that towers over our barn. The wind rocks her branches, and I see a big woman, her eyes closed, swaying as if to fierce prayers. She throws shadows on the barn and the mares.

A squirrel runs up a black walnut, across the branches until they become twigs. Then he crosses to the Linden tree, which came from Berlin as a shoot in someone’s boot. I’ve heard an owl speak from that tree and been soothed to sleep by her call.

Christie Purifoy in Placemaker says, “Trees—even in the wilderness—are singing a song, but if we plunge ahead in accompaniment without first stopping to listen, and without letting ourselves be changed by the song, we may find ourselves leaving not beauty but crooked patios and poison ivy and heartbroken tears in our wake.” So today I urge you, look to the trees in your life, let them show you how to leave beauty in your wake.

Some More Thoughts about Trees and My Faith

After I finished writing this, I thought about how trees feature in my faith, how the Tree of the Knowledge of Good and Evil tempted humans so much they disregarded God’s request not to eat its fruit. It taught them shame, showed them they were naked. God used animal skins to cover them, so animals died to make clothes for two people who knew they were naked and were ashamed. Was it a leopard that died? A panther? That sleek, fast, big cat? Or maybe it was a horse that galloped across the meadows, nose in the air, coat glittery. God kicked Adam and Eve out of the garden because there was another tree, the Tree of Life. God said if they ate from this tree they would live for ever, which would be miserable for creation, and miserable for them. (Imagine someone like Hitler never dying. Imagine never escaping your darkest days.)

Then there’s the other tree, the long stump, branches sheared off, bark rough, that Jesus died on, a sort of tree of life itself, because he broke death right then and there. As N.T. Wright says, it was the day the revolution began.

And as the writer to the Hebrews says, “Since therefore the children share in flesh and blood, he himself likewise partook of the same things, that through death he might destroy the one who has the power of death, that is, the deveil and deliver all those who through fear of death were subject to lifelong slavery” (Heb. 2:14 – 15). Even though I am in my sixties, and while I don’t like the idea of dying, I don’t have to be afraid of it, because death is dead. I felt that when my mother, father and brother died. That this was not the last word. No, not the last word. It felt like they were springing out of the grave then, as though time folded from their death day to their rising day. I don’t have to cringe, avoiding the deaths we die before we die.

And then there are the trees planted by the great river, when Jesus’ foot splits the Mount of Olives in two. Their leaves are for the healing of the nations. I think most about these trees–how someday heaven and earth will be joined and the nations healed, all of us healed.

In The Hidden Life of Trees Peter Wohlleben talks about how he thought there were stones covered in moss in a forest, but they turned out to be green wood, left over for the trunk of a tree that had died five hundred years before. He learned that trees have affection for each other, that they help each other, because if one dies, the forest is in danger from wind and sunlight breaking more of them. They spread their branches into each other’s branches to protect each other. He says, “But together, many trees create an ecosystem that moderates extremes of heat and cold, stores a great deal of water, and generates a great deal of humidity. And in this protected environment they can live to be very old” (12). They can warn each other of dangerous predators (bugs) by using smell, so they can make their leaves bitter. They are more awake than we realize.

I joined a launch team for Placemaker because I admire her writing and I want to be a good literary citizen. Others’ generosity with my novel, helped me, so I’d like to pass that along.

Besides, her Roots and Sky was a lyrical read about how she and her husband moved to an old farmhouse in Pennsylvania, so I wanted to find out what happens next. Placemaker is a book you curl up with on a rainy day and you are greeted with encouragement about the place you are making in the world. It’s about home making in the best sense of the word. And it’s about trees, so much so, it made me notice the ones in our yard. It inspired this post.

We learn about the places she’s lived, College Station, Chicago, Florida, and Maplehurst. We learn how she made each place a home, planting flowers. She notices the trees in each place, describing their beauty.

This is a quiet read, beautifully written, lyrical. Purifoy wonders how just it is to spend money and time fixing old trees, planting a flower garden, and tuck pointing her house. But she says, “We do the work of heaven when we bring order to the world around us. We are all gardeners of a sort and most of our lives are dedicated to tending, keeping and making” (184). She takes us to our own places and shows us how to love them. I will be buying this book as gifts.

Tell me what about the trees in your life? What have they meant to you?

If you’d like to have these blog posts delivered to your email, click here and sign up. It would be great to have you join me, so click here. And don’t forget to click on the email you receive so you are sure to get them.