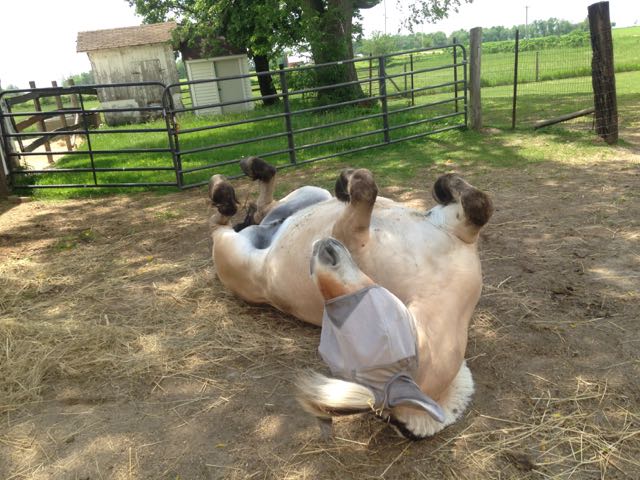 By Katie Andraski September 3, 2015 Farm, Horses, Reflections on the ground
No Comments

May 7 or 8, 2015. Morgen itches–her neck, her rump, her spine, her udder.  I’ve seen her poke her head through a fence in the middle of the paddock, when she could as easily walk around to the other side for that green grass. She is a bright mare, easily bored. She breaks things.

I have been too busy with wrapping up school to drive her down the road and occupy her mind. (And now that I’m out of school I’ve been sick with a nasty cold and then the weather has been rainy or windy. Inertia has taken over. ) One wall of her stall in our old dairy barn is the big door. Hooks and brackets hold it closed, so the wind doesn’t flip it off its hinges. When I saw she’d pulled both off the door, I told her in no uncertain terms how naughty she was. Bad. Bad. Bad. She listened. I told her Bruce would be unhappy. I was unhappy. She looked at me eyes bright, ears pricked.

My anger hit me with the force of too much sugar. I ate six homemade sweet rolls and one bowl of bean soup to try to maneuver around it, but the sugar and yeast bread only cranked me up. And beans, but we won’t say anything about the beans. A student wrote a grumpy email asking why he’d only gotten 94 points out of 500. Crap, I’d not changed the grade book to percentage. Crap, I’d not hidden that grade. (At the end of the semester, I work in private.)

Storms were coming in and I’d seen the barn door blow out from the tracks when an east wind pushes through the other barn door. Bruce doesn’t like it when she makes work, when she breaks fences and doors. The farm feels like it’s too much for him, and I can’t say as I blame him.  I looked at the screws and didn’t know how to put them back. One could use a screw driver. The other looked like it would need a drill. I didn’t know where the tools were.

Bruce asked me to hold Mo while he drilled the brackets for the barn door.  The last time he used a drill, she blasted through the extension cord, raising a welt I still see on her neck. She knocked over his ladder. He wasn’t going there again.

I sat on a board nailed across a door to a small room, while Bruce drilled the brackets. I didn’t feel good from lack of sleep, a head cold. Morgen did the most amazing thing. She lowered her head to my cheek and breathed three times in my ear. I felt  vulnerable as I’d heard of horses biting people’s faces. I gave her some pellets and went back to leaning my face on my hands. She brought her nose up to my cheek and breathed, three times, like she was trying to breathe strength or comfort into me. All I can say is that it was a sacred moment–about as close to Morgen as I’ve ever been.