By Katie Andraski November 19, 2014 Reflections on the ground, Spirituality, The River Caught Sunlight
No Comments 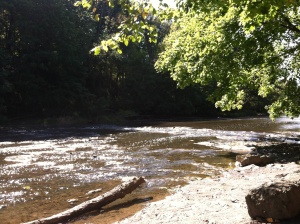 The Normans Kill. Photography by Roberta Lawrence. Used by permission.

Here is an excerpt from The River Caught Sunlight. Just after making funeral arrangements of her mother, Janice needs to walk away. Marcel is her brother’s girlfriend. You’ll find the novel’s title here as well:

“Back at The Farm, a warm wind coasted between the big barn and little barn, the aiming hairs for storms. If Janice saw the sky between them blacken, she knew they’d get a bad one. But today, it was plain blue. Nobody needed her, not Jim for his story, not her father and brother to mow the lawn, not Marcel who went home for a few hours. Janice walked out between the barns, following the horse trails until they disappeared in the lush, uneaten pasture. Marcel’s horses swung their heads up, chewing, tails swishing, then dropped them back to grazing. The dogs ran underfoot and away in the surging uneven circles of border collies, their bodies breaking the weeds and grass.

She walked over the small hillock at the far end of the field. The people who built their farmhouse were buried where she stepped, the gravestones plowed under by an earlier farmer tired of keeping the plot trimmed. She walked, but with each step, the ground dropped from her feet. That’s how losing her mother felt, like she was stepping onto air without a safety net. On top of the hillock a round apple tree spread its branches, fat red apples bending down. Janice walked up to a lower branch and pulled one off, her hand barely reaching around it. Arthur and King nudged her in the back of the thigh with their noses and flopped down in the shade. Janice took a bite, tasting the sweetness of an heirloom apple.

Janice wasn’t hungry enough to keep eating, so she tossed it in the field, both dogs diving for it, King reaching it first and tossing it up in his mouth. Then he circled back at Janice, holding it in his mouth, dropping it, stepping back for her to toss it again. She shook her head and walked past the tree to the taut barbed wire fence, pressing her foot down, bending the wire as far down as it would go. She slipped between the strands, a barb catching her shirt. She stopped, thought about it and slipped back, unhooking the barb. She tucked her shirt tight into her jeans and tried again.

When she stood, she stood on the cow path that would take her down to the Normans Kill valley. Legend had it the Normanskill was named after Albert Bradt de Noorman. Janice imagined a big man, eyes pale against his red face, pale red hair, deep red brows and beard, with biceps big as the small trees he left for the wide virgin timber of his river’s valley, the smell of freshly sawn wood biting his nostrils, his shouts. He teased his children and wife, making promises he never kept because the extra money went into the mill and the exhaustion of the work, driving him to use his fists on his people. She wondered what the community would remember about her mother or any of them three hundred years from now. What stories would be passed down? 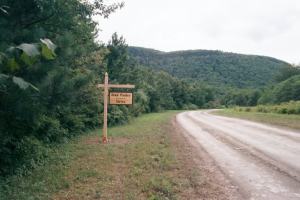 She looked up at the Helderbergs, the escarpment resembling a small blue wave on the horizon. How many would remember the school she started and how the Clear Mountain Study Center taught them a love for learning or the land or the arts?

Janice walked down the hill, swinging her arms to the hill’s downward pull. She looked at the valley to her right, maple trees and a clear forest floor with nothing but leaves down there. The Greens, who owned the farm before her parents, said Native Americans camped in this bowl, and that they had to chase them away.

A voice that seemed to rise from the land itself ran through Janice’s head. It sounded like wind running through hay just before it’s cut. “Keep The Farm no matter what. It’s the most beautiful place on earth and you are the daughter. You are an heir.”

What about Dad? What if he needs nursing care? How will those bills be paid?

The voice ignored her questions. “Build a house at the head of the road or fix up the upstairs; make an apartment.”

What about this work I’m called to do?

You belong here, taking care of us.

The voices went silent, the wind crackling over the dried grasses that made Janice think of snakeskins.

Didn’t Marie Antoinette’s ladies in waiting settle this valley? Did they bring their memories of bloody rivers when they watched the Normans Kill flowing quietly, full of sturgeon, bass, clams, its currents voluptuous and brown, the memories leaving their minds, drifting into the fields, settling into the timbers of these houses as the men and women notched them together? Did they haunt the valley, keeping it wild, long after it had been settled to the fine tune of electric wires, gas lines, telephone poles? Is that what she heard just now? The voice that her parents called the fierce Normanskill people, possessive of their land.

The wind circled her throat, squeezed her rib cage. She panted. Who’s owning who? It scared her. Walk. Walk. Let those feelings out. Your mother is dead.

But all Janice felt was her grief plugged behind a calm that deepened as she walked.

Janice ducked around a thorn apple tree, the branches full of inch long thorns. To her left the ridge dropped down to a farm road and shale cliffs. The cow path she was following would eventually join the road, leading to a foundation hole where a house once stood, built by the same family that built the house Janice grew up in. She looked down at the mud trail for clay rings that were shaped by the rain and a pebble, but the ones she found were broken in half. She stooped down and picked one up, felt the half moon edge, stuck her finger through the hole. Even as a kid, when she could pick them up any time, these clay rings seemed as mysterious as this valley.

When the ridge flattened and widened to a pasture, she picked mint leaves and smelled them, then followed the stream to the Normanskill where two mallards lifted off. A huge willow grew in the bank—the willow she’d wished for when she put her arms around her mother and she wasn’t there, wide and healthy. Janice spread her hands as far as she could reach around it. It would take two, three more people to make fingertips touch. The river whirled around its roots. There was the crackle of the river, fat and sassy, and the trickle of the water playing by the bank. Chips of light flickered on the opposite bank. The river caught sunlight, tossed it back in the weeds. She dipped the perfume bottle into the water, feeling the coolness run over her hand. She capped it and sat down to watch the light, the sand molding to her bottom, cool. Arthur and King lapped the water, bounding away into the dense growth of reforested pines that her parents planted to hold onto the hillside. Then they came running back.

Janice tried to grieve because this was the perfect time and a very private, beautiful place. No one would hear her sobs or shouts or coughing, but all she felt was calm, an inexplicable knowing that death is dead. She felt it in her bones. It didn’t make sense because she’d not felt close to God these days. Her mother was about to be buried, but Janice felt like she had already jumped out of the grave, that Jesus was calling the dead to rise. It was a trick of time Janice didn’t understand, but she felt it as real as the cool sand she was sitting on. Death was not the last word on her mother or any of them. 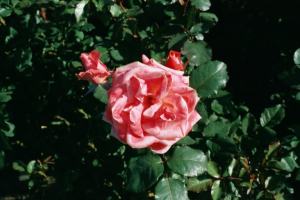 She fell asleep and dreamed her mother stood in front of an assembly in heaven, holding a bouquet of yellow roses. There were no straight, grim lines on her face, only a wide smile that made Janice sigh over how radiant her mother looked. Her mother turned to a man whose back was straight and sure, who was dressed in a white linen suit. Was it Janice’s father, who by that same trick of time, was there already? Or was it someone who was more husband to her mother than Kurt? The man reached up with his thumb and wiped her cheek. Janice felt like a rose, her own yellow rose, bloomed in her chest.

The breeze rattled the willow leaves waking Janice. It was time she got back and made supper for everyone. She stood and leaned against the wide willow, her cheek scraped by the bark, hugging hard. She pushed away from the tree and walked back up the trail, stepping on the clay rings, feeling them crunch under her feet.

The River Caught Sunlight is available on sale for $1.99 in the following editions: Nook, Kindle, ibook through the month of November. The print version is available at Amazon, Barnes and Noble and Books A Million.