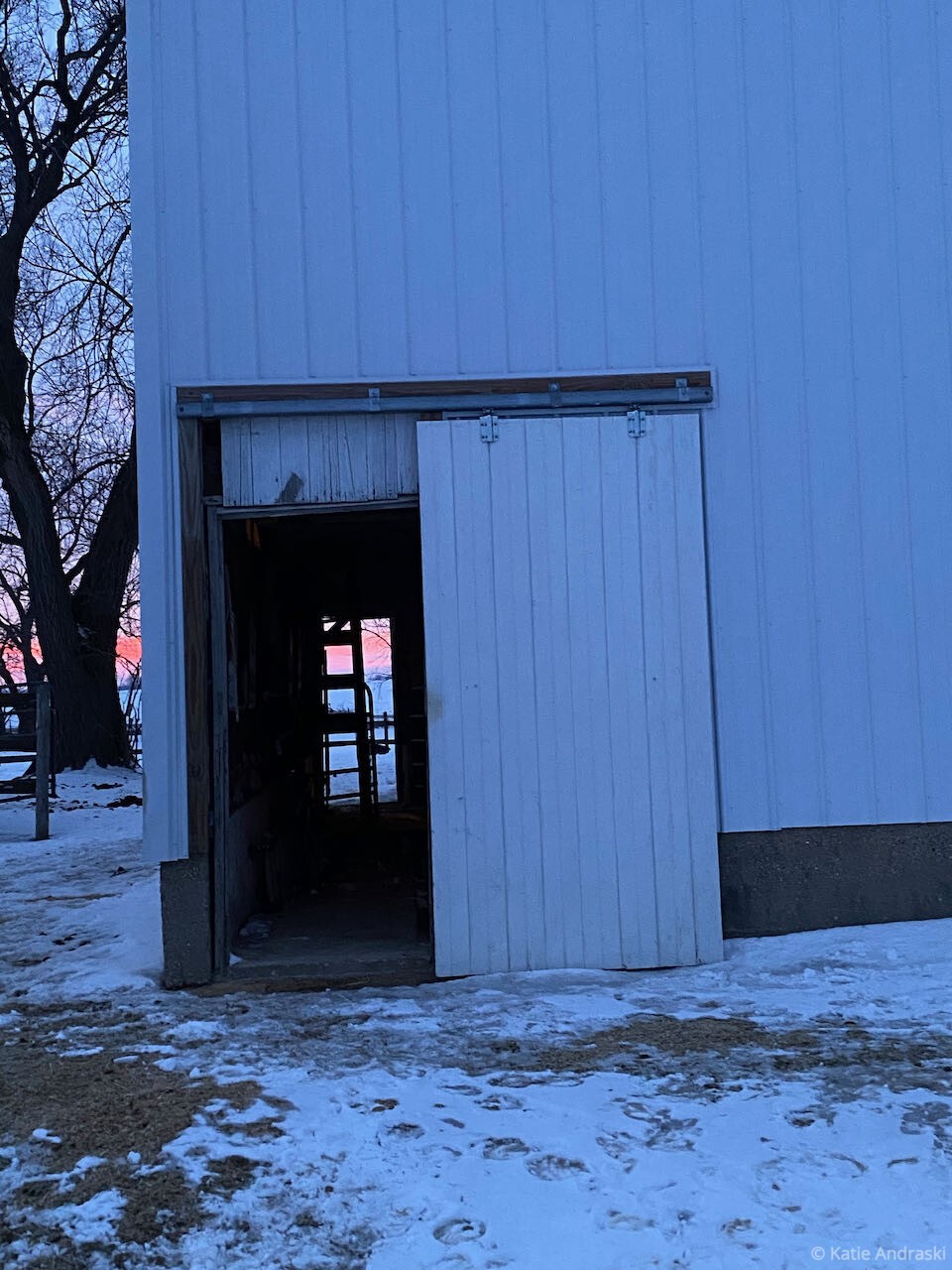 In the winter, the barn doors stick. It’s as though the ground grows up and grabs the bottoms, but it’s the sun melting snow on the roof and the water drips, freezes, sticking the doors to the ground. I jar and jiggle them loose.

The other day I was irritated with Bruce and lost my temper. I shoved and yanked at the door, but it wouldn’t budge because I’d yanked the trolley apart. (The trolley is the gizmo that slides the door across the rails.)

Bruce pulled out the step ladder. He did not yell or even sigh, “Another job I have to do.” He put the bolt back and tightened the nut and set the wheels of the trolley back in the rails, so the door slid as smooth as ice.

I thought about doors I’ve tried to open that wouldn’t budge. Eventually they broke.

I thought about how it’s not so good to lose your temper at a door, an animal, a person who had nothing to do with why I was angry. But it would have done less good to spout off at Bruce. That door might still be catawampus, stuck to the ground, wind and snow blowing through.

Besides, that day, I didn’t need to open the southeast door because in our barn there are two other doors that gave to my pull, so I could turn out the horses. When I thanked Bruce for his kindness, he said, “No big deal.”

Other things I Said About Doors

It took a few drafts to get to this one. When I first wrote it I was thinking about Brad Jersak’s book Can You Hear Me? and how he talks about how we can actually hear God’s voice. He shows how to sift out God’s true voice from the false voices and internal noise. I’ve been thinking about how gentle Jesus is with us, how He doesn’t reveal more of Himself than we can bear, even if that is his love. Here’s what I wrote for the last two paragraphs:

I thought about Jesus saying, “I stand at the door and knock. If anyone hears my voice and opens the door, I will come into him and eat with him and he with me” (Rev.3:20). Jesus doesn’t throw his weight against my heart or jiggle it until it breaks.

I am stunned by his gentleness. He could show up, eyes blazing, legs glowing like burnished bronze, but he does not. The beauty of the fields rolling through each season is enough glory. Maybe we too should be careful not to force people to love us or be our friend or even talk about stuff they’d rather not say. Maybe we too should hide our glory.

Then I changed the last paragraph to the following, because sometimes our hearts do break:  And Jesus doesn’t throw His weight against my heart or jiggle it until it breaks. But if it does, He draws near with a presence that says, “I know the feeling, I’ve been there.” Often, He sends one of his people to listen kindly.

I thought about how I blew it with a friend by trying to get her to tell me the latest chapter in her story, but she didn’t want to say and was more vague that she had been in the past. I kept asking and she answered vaguely, not happy to be reminded about difficult stuff when she had a day ahead of her.  The friendship had shifted, but I didn’t shift with it. I also know how it feels when a person demands I tell her what I think, and I know she is not safe, and she is hurt by my silence. I am reminded about how important it is to receive what people have to offer, even if it’s less than what we’d like.

Then there are the doors like opportunities. I remember how I met a literary agent and thought for sure he was going to be my agent. He seemed excited about the pages I showed him. I’d run the novel through several drafts with an editor’s guidance. And he’d already represented a book that appealed to the secular and Christian audience that I was trying to reach. This goes back to thinking I heard God’s voice along with my intuition and hope saying he’d be my agent. But I called to follow up and was told to call another week. That week I was told to call another week. I began to feel like that being lead on like this wasn’t healthy. Eventually they rejected me. I knocked too often. The door closed. And I wondered how my own hope mislead me into thinking I’d heard God’s will.

I won’t even tell you about the time I thought God told me in a still small voice that I was supposed to marry George because he could talk to me about God. He’d look across the dining hall with these knowing eyes, but he wasn’t even interested in a friendship, and called me “Sis” because that was the rage at my evangelical college, and he said I reminded him of someone. I was as close to God as I’d ever been, the middle of my First Year in college. Thank goodness I was wrong in how I heard God’s voice and my heart. What a miserable marriage that would have been.

So I am reticent about even listening to the voices in my head and saying, “God told me.” Instead I listen to Bruce, and advice my friends give, how life unfolds, and what I read in my books. I also listen to my body, and whether I feel a door is opening and light is shining through or if it is closing and I can’t open it and I feel heavy, closed in, claustrophobic. People have told me how they saw me in their minds eye–a rainbow wrapped in chains, a big dark thing looming behind me, how I should work on being famous, and I have been put off by their words because they don’t know me. When I was young, men I was dating used to pull this. They’d tell me who I was before I told them. Those relationships did not last long.

Doors did open too, like my job teaching first year English at NIU. About two weeks before class started, Bob Self called and asked if I would like to teach there. Of course. I’d simply sent in my resume. Apparently my chair at Rock Valley College put in a good word. That began twenty years of rewarding difficult work that felt like a call that began when I saw the injustices towards minority communities and wondered how I could help. Somehow my desire to help and my work as a poet and public relations person came together help me effectively serve my students.

After Bitsy died, I asked if Tami at the barn had any kittens or young cats. The cats she brought to the barn were as friendly and people oriented as dogs, walking up to you, asking to be petted. She did have three six month old kittens, so I visited with them one Saturday and brought home the friendliest calico, Tipsy, who I am renaming Kali-zoo. She has made fast friends with Smudgie and pretty much runs the house. She often will sit in my lap while I am watching TV. Smudgie has gotten friendlier jumping up on the bed, purring, asking to be petted first thing in the morning.

And a few weeks ago, Derick Patterson was making a delivery in Marengo. (He is based in Oklahoma.) It was snowing the night he came through, and I didn’t want to miss the Batchelor, so we touched base in the morning. Bruce finished with the dentist and I finished with chores just as he was unloading, so we were able to meet at the Belvidere Oasis and exchange even more stories since we visited this summer. (I baby sat Derick when I was in grad school. His family was like a second family to me.) I am struck by how thankful he is for his blessings, even though he has lived a difficult life.

Well, two doors finally stuck fast. Bruce says it’ll be awhile before the ice melts enough to loosen them. It snowed a heavy wet snow yesterday and I neglected to shovel the minor accumulation away from the doors, not realizing that the slush would freeze hard and hold the door fast. Sometimes I just don’t think. I was in a hurry to get the horses in the barn and close everything up because there was an east wind, which can pour snow in the barn, all the way back to Morgen’s stall. Before the snows came I made the mistake of adding ag lime to apron in front of the door so there wouldn’t be a step down for the horses. Well, I added too much because there is no space for ice to build up when the snow hardens and water drips off the roof.

A Poem about Doors

When I was in grad school, I wrote the following poem about doors and God and men:

where I can hide from the man

slithering to penetrate the darkness

But Lord be the door to the barn

where I kneel. Swing open

with the fulness of weight

and oak beams to the man who carries

the stillness between bleats of his s heep

and lays it softly on my head.

It’s funny how this prayer was answered. In many ways I was kept safe from people who could have done serious damage. And the Lord did open the door to the man who carries stillness between bleats of sheep, the land waiting in silence.

And that’s all I know for now.