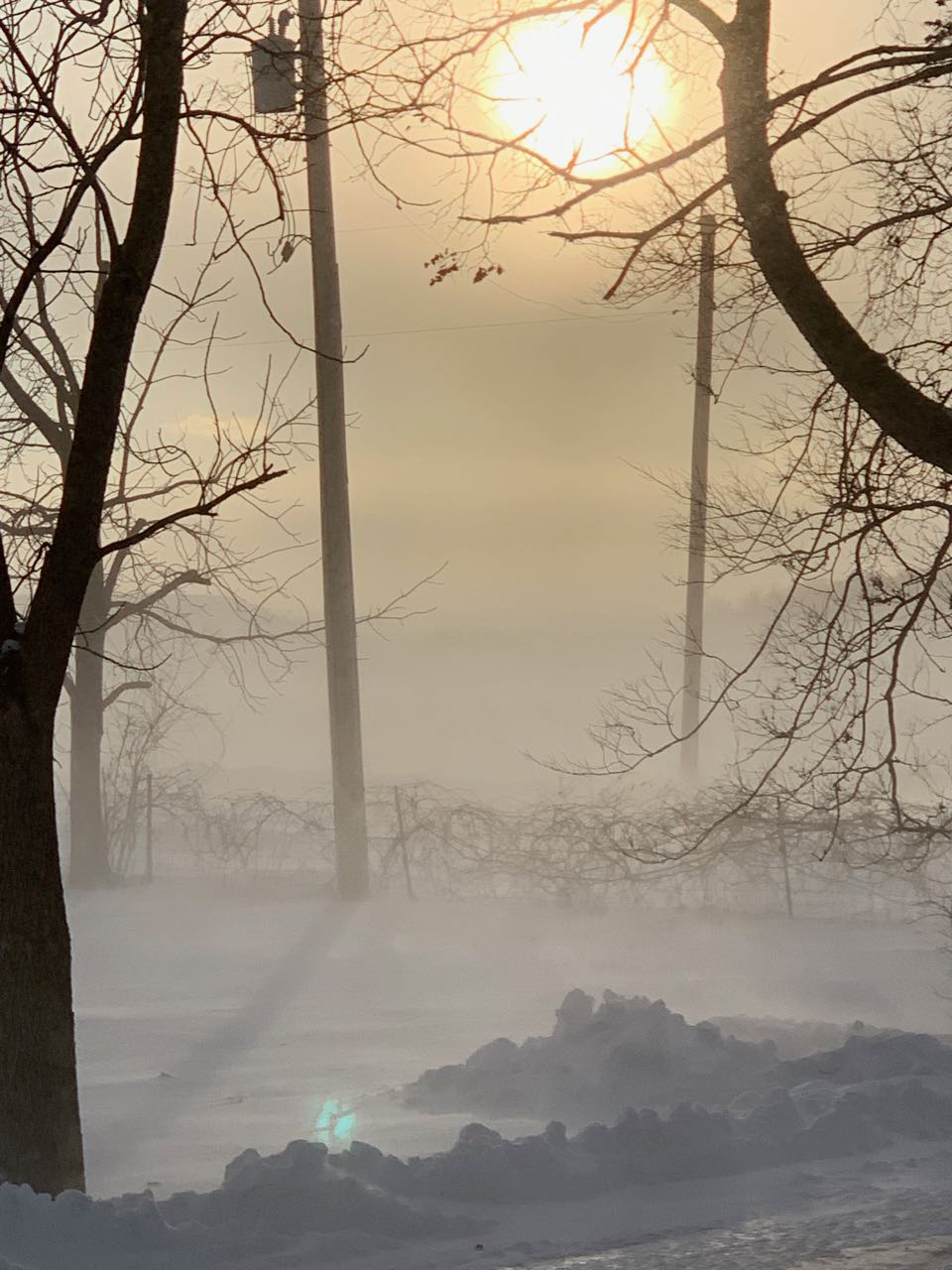 I was standing in McDonald’s, waiting for my Egg McMuffin, standard fare after Weight Watchers, when a man tapped me on the shoulder and said, “You’re Katie. I had you as a teacher at Northern.” I burst into joy at seeing Tashaun. We figured out that he’d studied with me in 1995, my third semester teaching at NIU, and my first teaching in the Chance program. (The Chance program helps students whose high school education did not adequately prepare them for a university education.) I did remember him but vaguely. I explained how I could scramble students’ names when I knew who they were. It’s partly why I retired. Learning names was getting harder.

“I still have the cup you gave me,” He said. “Remember it had a plant in it?” It took awhile for me to remember that I’d given out cups as prizes for perfect attendance back then.

“This has to be God,” he said. It has to be. I was so delighted to see him again.

“This is what heaven feels like,” I said, “that great reunion.” I kept thinking about the prophecy in Isaiah that talks about how barren women will be the mother of many children. “Sing, O barren one, who did not bear; break forth into singing and cry aloud, you who have not been in labor! For the children of the desolate one will be more than the children of her who is married,” says the Lord. (Isa 54:1).

This was a deep comfort to me when I was hit with waves of grief for not giving Bruce children. I grieved as we renovated our farm house, after the NIU shooting. I grieved when I saw the look on Bruce’s face when he saw little ones. His eyes were so soft, so in love. And I’d denied him this. I’d denied us family. He has said he never had a burning urge to have children and as a writer, who felt very broken, I didn’t think I’d be much of a mother. There was too much fear, too many what ifs. We didn’t have enough community to support our parenting either.

I thought of the beautiful passage in The Great Divorce a novel where people in Hell get to take a day trip to heaven. They are free to stay if they like. The narrator sees a brilliant beautiful woman whose spirit shines through her clothes. He is told that she is an ordinary person, that “fame in this country, and fame on earth are two quite different things.” Many children and many animals, of all kinds are following her. The narrator wonders about this.

His guide answers: “Every young man or boy that met her became her son–even if it was only the boy that brought the meat to her back door. Every girl that met her was her daughter…her motherhood was of a different sort. Those on whom it fell went back to their natural parents loving them more. Few men looked on her without becoming in a certain fashion her lovers. But it was the kind of love that made them not less true, but truer to their own wives…

Every beast and bird that came near her had its place in her love. In her, they became themselves. And now the abundance of life she has in Christ from the Father flows over into them…It is like when you throw a stone into a pool, and the concentric waves spread further and further. Who knows where it will end? Redeemed humanity is still young it has hardly come to its full strength. But already there is joy enough in the little finger of a great saint such as yonder lady to waken all the dead things of the universe into life” (Lewis, C.S. The Great Divorce. Macmillan, 1966. 110 – 111)

Imagine having joy enough in your little finger to waken all the dead things? Imagine those waves of goodness running through a thousand generations. That’s what’s coming when the Kingdom come in, complete.

Tashaun is doing well with his life. He is married with two children and working for a social service agency that helps the elderly. While he is management he will still do the extra thing. He was at McDonalds because he’d taken one of his employees to a clients’ home the day before because they couldn’t get out of their driveway and he had just picked up that employee. I can’t tell you how good it was to see him after all these years. And it made me know my age because he was sporting grey hairs. But what a gift to be remembered as a teacher, that little work I did, teaching English, doing some good.

This happened to me once before, when I was suffering from a terrible breakdown in my confidence as a teacher and even as a human being. I was feeling pretty worthless that spring, when I was found on Facebook by a young man I baby-sat only now he was a strapping powerful man, working as a lineman. “Do you remember you taught me to listen for silence, where there were no human sounds? I found two places where there wasn’t human sound.” He said I was a unique babysitter, writing poems for him and his brother.

Derick and Tashaun gave me a gift by finding me, that was like God reminding me of the great reunion that will come at the end of time, that the small kindnesses we offer do make a difference.

Be Kind to Your Veterinarian: WNIJ Perspective

Recently we spent hours at the local emergency vet clinic. A vet tech said she left on Christmas Eve, depressed, partly worried about our dog because he’d won her heart. We told the vet to see what she found when she opened our dog.

These decisions can bear down on veterinarians something awful. Putting animals out of their misery, over and over can make taking one’s own life seem reasonable. A recent Washington Post article cited a study by the Center for Disease Control that said, “Between 1979 and 2015, male and female veterinarians committed suicide between 2 to 3.5 times more often than the national average, respectively.” One of the very few people I know personally, who committed suicide, was a veterinarian.

The same article noted how the financial burdens laid on veterinarians’ shoulders along with long hours for relatively low pay, can add terrible stress. Clients who take to social media to badmouth their veterinarian can drive that person to suicide.

Please consider this before you badmouth your vet to your friends or on social media. Veterinary medicine is not an exact science. Veterinarians are imperfect humans like the rest of us.

I’m Katie Andraski, with thanks to Ginny Aulik, for bringing this to my attention, and that’s my perspective. If you’d like to hear me read this, click here.

The polar vortex has descended on us. We’ve heard about it for at least a week, the meteorologists excited about weather more extreme than Antartica or the top of Mount Everest. Yesterday Bruce pointed out the swirl of feathers by the spot where he dumps seeds for the birds. He said a sharp shin hawk might have snagged a junco.

This morning was mild compared to what shoved in this afternoon. Though my face burned when I walked the dogs, and I was cold under my coat and long underwear. We only walked to the boysenberry tree. It’s a challenge to give the dogs enough walk to do their business. The snow plow was pushing snow down by the corner and then headed towards us slowly. We stood in the ditch waiting. Later in the day, we saw them come by two more times, pushing the drifts back.

I moved the mares to the east side of the barn to give them shelter from the west wind. I don’t like to feed them this close together, but fortunately they aren’t chasing each other. They like getting the extra hay to stay warm. Bruce helped me do water chores, throw down more hay, and clean the barn, so I got by without hand or foot warmers. I’m grateful for the Sorel boots he bought me a few years ago.

But if you’ll notice the line of ice sickles could be nasty if they dropped on a horse’s head or back. (I’d placed the hay closer to the barn.) Bruce suggested he could get up on a ladder, but I shook my head. No way would I let him go up there on this day. So he took one of those scrapers that pulls snows off the roof and knocked down the ice. The horses puffed up and snorted away.

We covered our two big windows with blankets to keep the cold out. We have a pot of chicken chili on and wool blankets wrapped around our legs.

A few weeks ago I longed for this bracing cold and it’s arrived. I’m a little concerned how the horses will get through tomorrow when the weather drops to 50 below wind chill. And even more concerned when the weather hits 48 and rain next week. I call these changes in weather colic weather.

But this fierce cold feels cleansing. It’s something to push against, like climbing a mountain. I feel like sleep when I come inside. I think of the Psalmist who said: “He give snow like wool. He scatters frost like ashes. He hurls down his crystals of ice like crumbs; who can stand before his cold?” (Ps. 147: 16 – 17, ESV). Even God himself is in the middle of this fierce weather. The same God who says earlier in that poem: “He heals up the broken hearted and binds up their wounds. He determines the number of the stars; he gives to all of them their names” (Ps. 147: 3 – 4.) He heals the broken hearted and names the stars and casts down snow on the ground. Great is the Lord, great in his mercy that reaches to the heavens.

If you’d like to continue to receive these blogs, sign up here. I try to write them weekly but don’t always succeed. (This one is doubling up for missing last week.) Thank you for being part of my community.