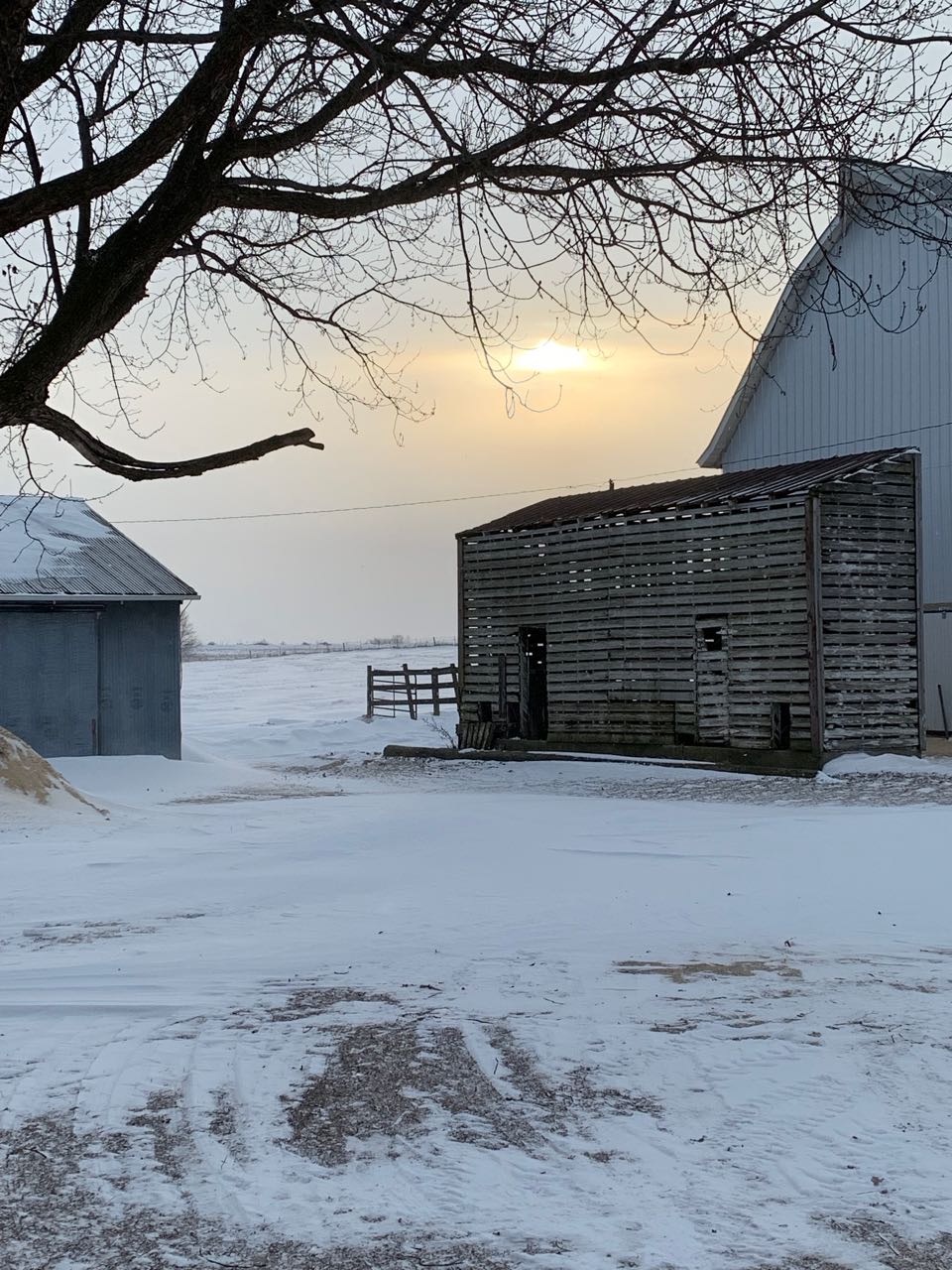 1.
The horses stood a couple hands taller, puffed up like cats, running in the paddocks, an east wind, brushed off Lake Michigan and rain coming. The weather is changing yet again.

2.
Finally the snow is coming. We’re under a winter storm watch that changed to a winter storm warning over night. This will be the second storm of the winter. The weather guys said last’s week’s snow wouldn’t amount to much where we live because it was due to track south. It came more north than they said, beginning light as dandruff.

Bruce came in and said it was snowing harder, an east wind blowing in. I shrugged my shoulders. I can’t shut the door and open the south room because it would block the horses from water. But I wasn’t happy when I walked out to do chores and the whole back of Morgen’s stall was covered in snow. I brushed it away as best as I could and dumped fresh shavings over it.

The next warm day I asked Bruce to put an eyebolt near the outlet on the other side of the barn, so I could hang a water bucket and open that side up to the horses when the east wind blows. (The east wind is the worst. It drives. It’s damp. It blows through the barn. )

We set out for church but the roads were not plowed and slippery. You could feel the car slide. We held our breaths when people passed us like it was nothing. We turned towards home, figuring it wouldn’t be fun, coming back after dark.

3.
I’m looking forward to this weekend’s snow, the hardship of winter, the brace of air that stings my face and burns my hands. There’s energy pouring through the snow, fierce energy in the air, with snow ticking against the side of the barn, coming through the weeds in our ditches. It taps against the windows and slowly builds on the sills. We will be closed in, barely able to see our neighbors.

With the wind chills going below zero, water won’t be easy. We haul buckets from the side of the house because the barn well went dry a few years ago. We opened it once but the water turned green in the sun. I’ve been too full of inertia to take a sample to the health department. Usually the sun warms the spigot so I can stockpile buckets for the times it doesn’t warm it. Lately I’ve been able to leave buckets filled, ready for the next round of chores.

Several friends head south during the winter. I don’t blame them. I’m thrilled for a dear friend who has bought a house in Arizona. I can imagine her and her husband soaking in the bright sunlight, the cobalt blue sky. I hear happiness when we talk on the phone. But bright sunlight and blue sky would exhaust me. I’m an indoors person who comes alive in a rainstorm or snow storm. As I said, all that energy, flinging out of the sky. I don’t have to feel guilty for doing indoor work.

But when I asked Bruce where he’d like to go if we moved, he said, “This maybe crazy, but Vermont. It doesn’t make sense to head farther north, where the winters are harder.” But I hear him because my people live out east. I’d like to be a few hours away instead of half a country, but Bruce and I know better than to move where it’s harder to live, at this stage in our lives. Our friends are wise to leave winter’s fight for warm days.

But I forget how much work it takes to deal with the snow. Bruce has to plow the yard to get the drifts out of the way, so I can haul water from the house and haul manure from the barn. I haul open the door and even though we tried to block the cracks where snow flies in, it flew in.

I opened the south side of the barn and kept the north side closed. I hung the water bucket in a new spot. And tried to feed the mares where the wind didn’t cut, but Morgen couldn’t take all that change. She shagged Tessie away from her pile driving her into the paddock and open wind. Finally I carried her pile to Tessie where she usually eats. My legs ached from the cold. I reached for the pretzels and honey mustard pretzel dip as soon as I pulled off my coat and boots. I put on dandelion tea.

4.
I think about a talk Martin Marty and I had years ago. My parents had just died and I was promoting my company’s books to The Christian Century. He invited me to his home. He shared drawings from his book A Cry of Absence. He was grieving the loss of his wife and understood my grief. He said that there is a winter sort of spirituality, where our walk with God is not all joyful, joyful. There are seasons of grief. “The absence can come, however, to a waste space left when the divine is distant, the sacred is remote, when God is silent. The wind of furious winter for a while blows without, and then grows silent as spring comes. The fury and bleakness within the soul can remain, no matter what the season or the weather” (2).

But even this sense of absence and grief has its own beauty, as hollow, as painful as it is. I spent years walking through it. Angry, whining, crying and complaining. But pleading, “Please, please God don’t let me grow into a bitter old woman.” And I’ve not. And there’s that lovely passage in Psalm 55: “In the evening, in the morning and at noonday, I will complain and lament and the Lord will hear me. He who is enthroned of old will deliver me.”

Once when my hands were burning from the end of the rope and it was a long way down, I remembered Isaiah and his cry in the presence of God: “Woe is me for I am a man with unclean lips and I come from a people of unclean lips” and was comforted. Maybe God’s absence means He’s drawn near, in all his goodness. And when someone so good draws near someone so flawed, it can feel like absence.

Putting the Horses in the Barn

5.
I called Morgen from inside the house and she turned her head and pricked her ears. But when I grabbed the lead to bring the mares inside, Morgen dove away, running and snorting. I was bringing her in another door. She bolted past me. Two lengths on kicked up her heels. Tessie came through the back door, back into her stall. I closed the doors so Morgen wouldn’t follow. And went back to the door and lead her in. All the while I was listening to Krista Tippett talking to Mary Oliver. Maybe it was the extra voices that unsettled them. Or the wind pulling a serious drop in temperature behind it. They run to keep warm.

It’s joy, contentment with the moments of my days, that has been a long practice to learn how to receive. But more on that next time.