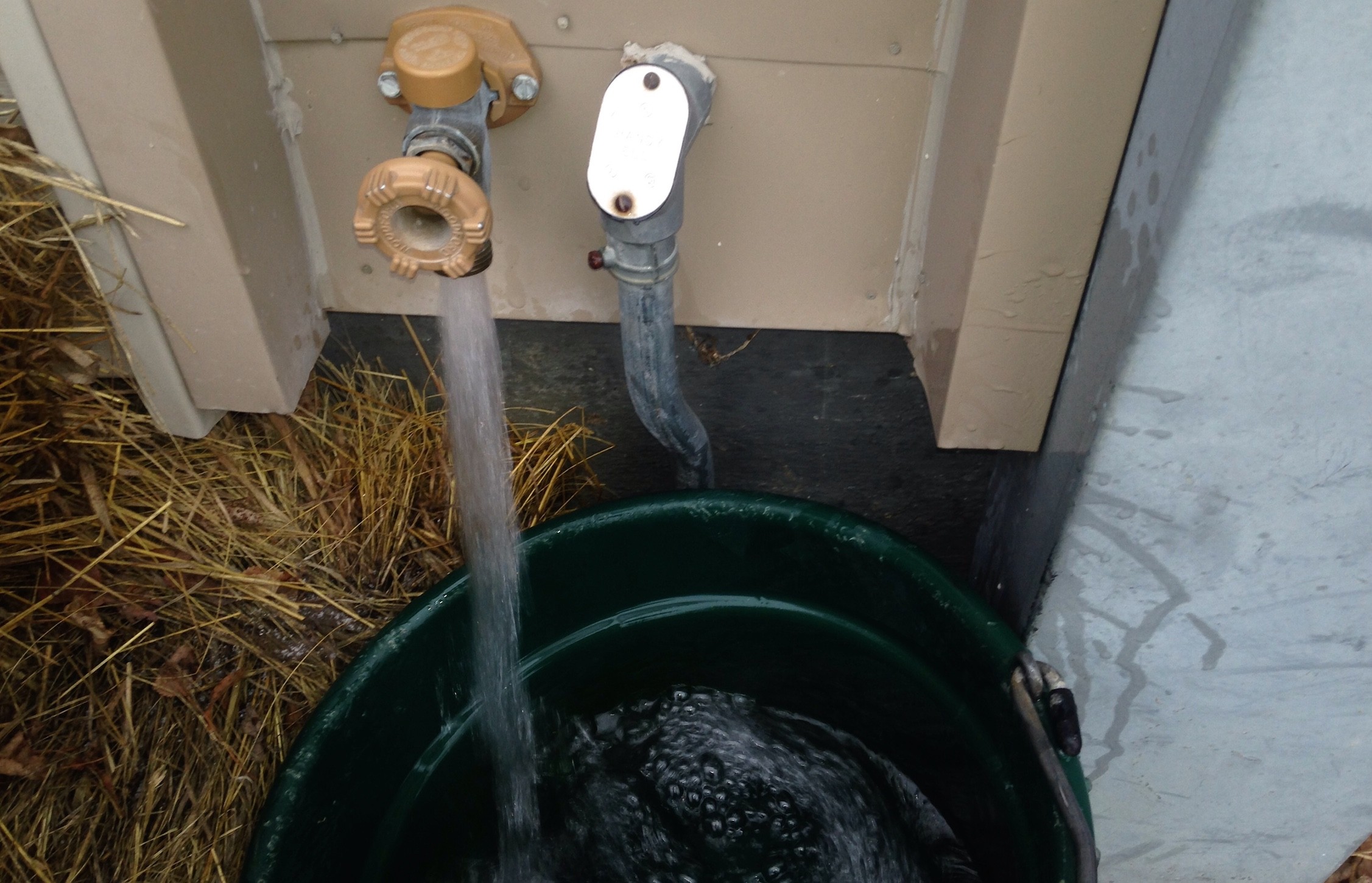 When I think of a well, I think of the big round stone that sat outside my brother’s room on the farm in New York. It looks like a millstone and was laid before end loaders were even a thought. There is a round hole in the middle, that used to be plugged by a red well pump. I’ve looked down at the water reflecting and wondered about the mystery of being at the bottom of a well and looking up and seeing stars in broad daylight.

On our farm we have two wells, one for the house and one for the barn. A few years ago, a drought sucked the barn well dry. The well guy tried to push the pipe deeper but said rock stopped him. That’s the hardest well to replenish. He said people in town had lost their wells and we started hauling water from the house. I use a radio flyer to squeeze three buckets that I roll and slosh over to the barn. Bruce faithfully checks to see if the heat stays on in the pump house. I’ve pulled the spigot a couple times to see what we get, and the water has come. But when I’ve set it out on a warm summer day, it’s turned bilious. I’m afraid to water them and have been too lazy to call the health department to test it. So I tip a bucket under the spigot, open it and listen for the water. It is here that Onyx allowed himself to be touched. He’d hop on the hay bale and dip his head for me to stroke it.

When I think about writing, I think about it like a well filling. Sometimes sentences have come to me and I have tried not to think them until I can get to the page and give their very faint whispers a voice.  My writing well, too, has gone dry. Three times, maybe four, I can recall it going still. This has been hard when I have drawn my identity from being a writer, from this call to write. The first time came after Howard Nemerov advised I give up poetry take up farming. The second time came after spending a few years, staying up to the wee hours of the morning, writing, because that’s what I knew to do–write. That was my call, so I wrote. Foolishly I showed the rough, raw manuscript to someone who said I needed to learn how to write. I needed to work through the book scene by scene. He didn’t have much encouragement. I took the train to New York to pick up the manuscript and smiled wanly at him. I stretched out on my couch and slept, my dreams doing the work my pen could not. The third time was after we moved to our farm. I’d written about three long drafts of stories in a few year’s time. I’d tightened my novel and sent it out one last time, the editors and agents saying, it’s not quite what we were looking for in hand signed notes. Each of these times I was so spent, it didn’t matter if I wrote again.

Recently I read in a Tweetspeak Poetry newsletter: The Best in Poetry: This Months Top Ten Poetic Picks about how we can be too productive. “The Japanese have defined a form of death-from-productivity: karōshi. Karōshi is when you are so productive your heart or head break and you bleed to death inside yourself. Conversely, if those organs have persisted but the mind has not, karōshi can become karojisatsu: suicide from overwork.” L.W. Lindquist was quoting “Against Productivity:This Essay Took Four Years to Write“. This make sense to me, because sometimes you need to be still, you need to leave the well alone so it can fill up. You need to waste time. The writer says, “Wisdom takes time. It takes staring out into the rain, It takes service to others. It takes getting nothing done to make us human again. To see the connections between things requires studying the blank spaces between them, days that slip into boredom and loneliness with only a person and their senses and their imagination to keep them company.”

We’ve not tapped our well for the horses for a good two years. We’ve opened the spigot a few times but the water has turned green in the sunlight. But it’s time now, to get the well tested and possibly shocked so the mares and chickens can drink the water. And so I don’t have to pull buckets from the house to the barn in my radio flyer.

If you would like to read more of my writing, The River Caught Sunlight is on sale as an ebook for .99 for the Kindle, Nook, iBooks, and Kobo until the end of December, 2014.  It is also on sale as a print book at Amazon, Barnes and Noble and Books a Million. (The print book is also on sale.)