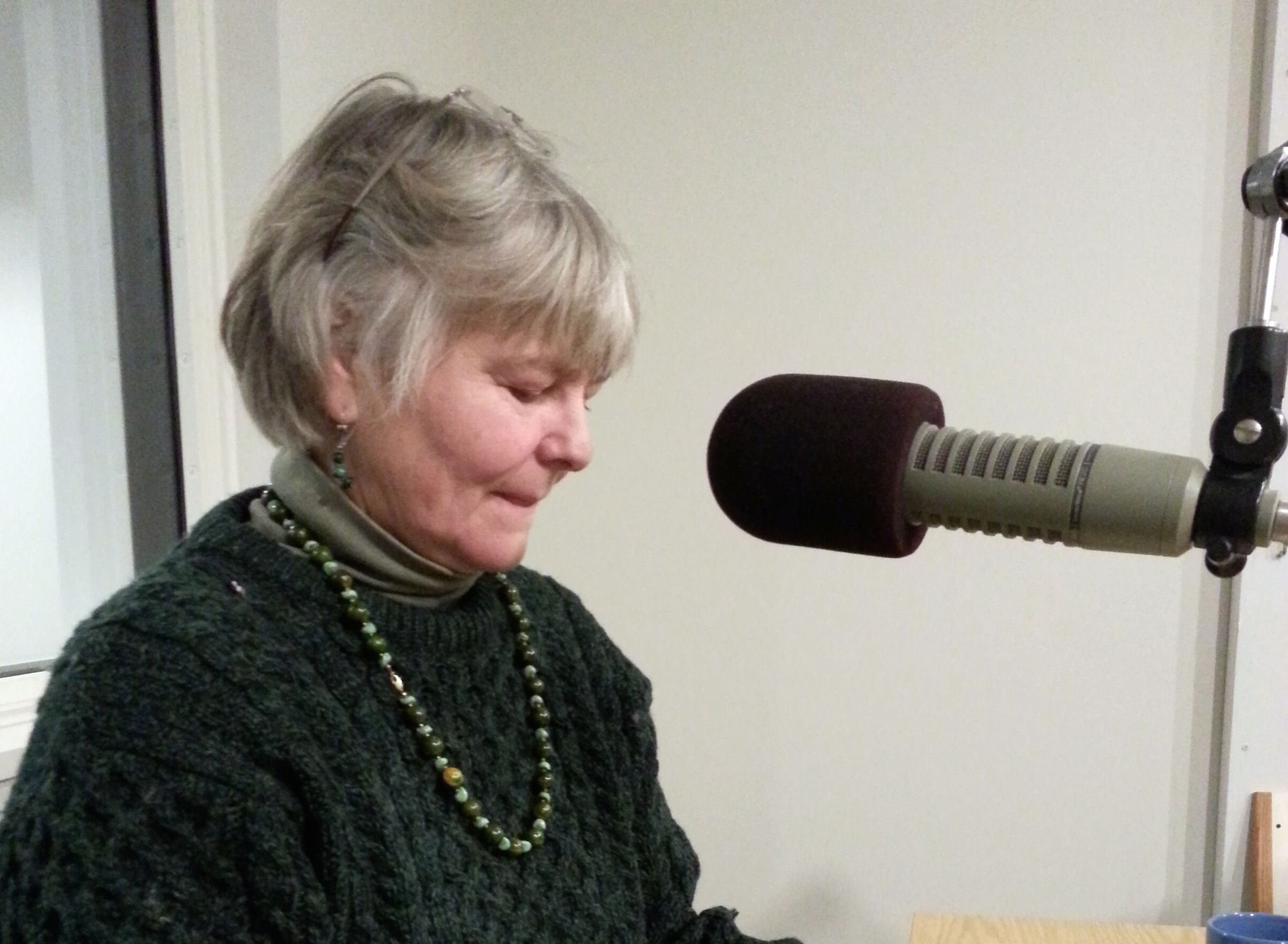 Dan Klefstad of WNIJ looks like he sounds, tall, lanky, with a very kind voice that sounds the same in person as it does on the radio. He met us in the parking lot on a brisk morning because the building was locked for holiday break. Bruce and I were five minutes late and Dan’s cheeks looked a little smacked from the cold, though he said the cold keeps him awake. He’d been at the station since 4 am.  As he walked Bruce and I to the door of the studio I couldn’t get over this–his voice sounded the exact same as he does on the radio. He reminds me of a the beautiful yellow pine floor in our upstairs–smooth, sturdy, with knots that only add character. He’s a tall drink of water. We walked downstairs, concrete on either side, stepping into office space that reminded me of a bunker. He pointed out the lounge area, the restrooms, other studios. I met other announcers, whose names have slipped by me because I was getting terribly close to that microphone, to the surprise of Dan’s questions. (Dan later told me they were Guy Stephens and Jenna Dooley. Guy is WNIJ’s arts reporter and Jenna does All Things Considered.) “This is my first interview for the book,” I said. They seemed surprised, but they said they discovered new writers, one of whom was featured as a best book for Chicago Book Reviews. Jenna said she thought the book was a winner because it kept turning and surprising her as she read. Ah there is hope.

Interviews and readings have given me the fear. Readings because I didn’t know who would show up and I didn’t know what part of this thirty year story I should tell or how to tease my audience enough that they’d want to read my book. I was most worried about what I’d read and have been worried about my mind giving way when asked a difficult question. My first reading was for professors at NIU and I needed to come up with something formal. I worked to place the story in context of history as I understood it. I sweated that one, but the other two readings went well, especially the one in DeKalb.

Dan threw me a few questions I didn’t know how to answer or that I may have answered too honestly. When he asked how Christian publishing has changed, I’ve said I don’t really know. I do know my publisher asked if there were swear words in the book because Spring Arbor, an evangelical distributor was interested in carrying the book. I told my publisher it’s not so much swearing that would be trouble, but I don’t want to silence what I have come to believe about gay marriage, hell, even the second coming. I told Dan how I’ve seen how that market can be mean, even back in the early 80’s when an author said she listened to angels. But there are good people there, who are doing something to help the world, and I wish we could build bridges to them.

His first questions had me stumbling, saying um a lot and I wondered how this conversation would ever sound good, though he can work magic with editing. I was glad this was not live. The microphone looked like a balloon in my face and I looked back at Dan’s script, in 18 point and wondered where he’d lead me. What did he see in the book? (I’ve been blind to the book. I have welcomed any insight my readers offer.) I relaxed when I read my excerpt from the second chapter. My web excerpt opens the novel, though I wish I’d read from a section a little farther into the book, where my characters are looking at the family gravesite and Janice’s father wants to sell the farm. There is another theme in this book, how children left with an inheritance can’t handle it. Seems like one feels they deserve the most.

Dan asked if the part about Janice not believing the authors she promoted was true to my experience. “Yes, yes it is,” I replied. It was based on my work with Frank and Francis Schaeffer. “I’d tell my journalist friends that these guys were fomenting revolution and they said the best thing I could do was promote them, keep their movement from being secret, where it might gain power.” I admitted that Frank and his dad knew I wasn’t a true believer, but here I was getting them stories in Newsweek and an interview on the Today show so they kept me around.

How did you leave Christian publishing? “Well, I was fired because I asked an author what kind of work he did. When they said we were through, I told them that I wasn’t into promoting fear and hate. One of their manuscripts terrified me with nightmares of coyotes snarling. How I began teaching? My horse took me back to a community college because I needed to support him.”

When we were finished he had recorded 25 minutes of material. “No one has complained about me making them look bad,” he said. “Could you reread a paragraph in the second excerpt?”  I said though instead of through. Now, I’ve got a little anticipation like Christmas. What will he chose out of our conversation? How will it sound? And a little regret that I didn’t take out my iPhone and take pictures of him, like he took of me.

This will air Monday, February 9 at 6:52 and 8:52 am. After that the seven minute interview will be available as a podcast on WNIJ’s website.