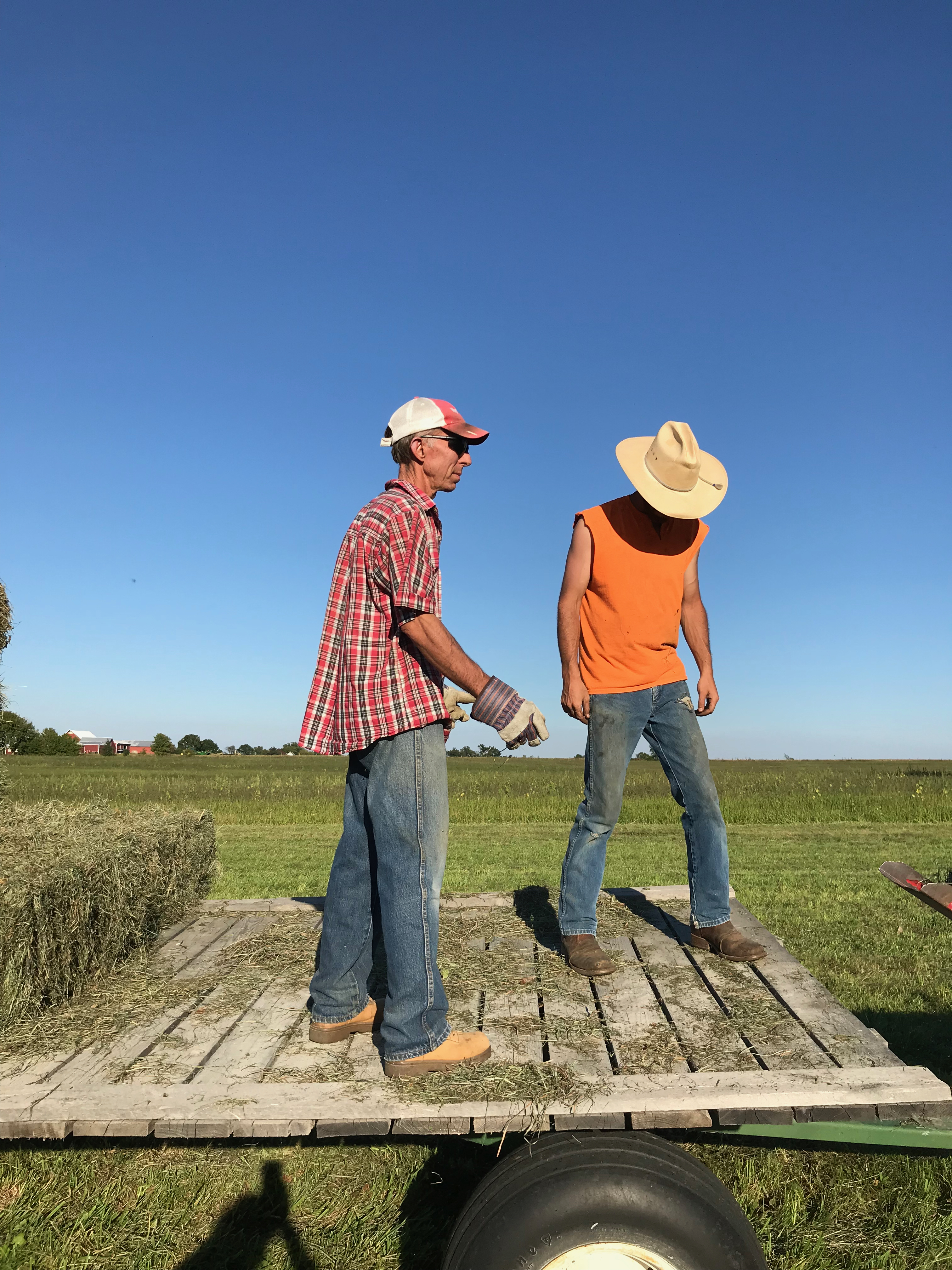 A couple weeks ago, the farm came alive with men at work. It’s not every week we have two different crews working our land at once. Beaux our hay guy, drove up the field cutting our hay. A high from Hurricane Florence settled over us keeping our skies dry and lovely, while the East coast got dumped with rain, wind, and storm surge. Hurricanes make good hay making weather.

Beaux ran his tractor in circles around our fields, the hay flowing into his haybine, like clouds running before a front, the rows on the other side quiet, flat, until the whole field was flat, hay drying for our horses.

It’s a gift to drop hay when you have a week of dry days, when you don’t have to stress about a blob of orange, yellow and green crossing the Mississippi, aiming for our fields. We’ve been lucky these ten years we’ve dropped hay, with enough dry days to pick it up safely, or the weather forecasters have been so accurate we could pick our days wisely. Wet hay can burn down barns. It heats up and spontaneously combusts. I’ve felt that heat.

I waved Beaux down to chat. We talked about spraying for clover and fertilizing the field after soybeans are picked. (With this first week of October’s active weather pattern, it might be November before the beans are picked. Bruce is afraid they might turn moldy.) Beaux said he thought he dropped 150 bales, but we picked up 285. The fertilizer we put down in the middle of the summer must have kicked in, he said. Immediately, the fields didn’t look like they’d been shorn. Beaux is saying he may try for a fourth cutting if it stops raining. Rain is bad for harvest.

Three ash trees died from the emerald ash borer–such a pretty name for a killer insect that doesn’t even belong here. I’d been itching to get them cut, because a stiff east wind could drop them in the road and onto power lines. I didn’t want our trees to take down the lines in the middle of an ice storm, the power out when we needed it the most. I didn’t want the liability, though I found out later from our tree cutter that unless Com Ed wrote us a letter, we wouldn’t be held liable.

Sometimes you run into people who can help. A tree collapsed across a neighbor’s house and men were cutting it as we drove by. We stopped and asked for their card. Dale strikes us as a frugal farmer who knows who might offer the best deal. He raises the most beautiful Black Angus cattle, the cows and calves terrifying to our driving horse. Our other neighbor, Mrs. Peterson called to see if we could go in on the deal and maybe get an even better price if our tree cutter person could deal with our trees the same day.

Our tree cutter handed Bruce proof of insurance and  gave us an estimate that seemed fair. He was short, older than Bruce and I. He reminded me of the hard working dwarves in fairy tales. The crew topped off the three trees, the branches cracking. They blew the debris off the road. And I was relieved that Bruce didn’t try to cut the trees and that we’d not have them drop on the lines.

They make baseball bats out of ash wood but I didn’t know these trees like I know the giant elm standing by the barn or the oak that I look to on the Peterson’s hill when I walk down the road or across the yard to the barn. I just found out trees talk to each other through their root systems. I wonder what they said to each other as they were dying.

Our neighbor will take logs we can’t use and Bruce is planning to burn the trash once our neighbor picks his corn. He says we’d be the talk of the neighborhood for years if we burned down our neighbor’s corn.

I could have bathed in the energy of these men working our little farm but I had my own task to run to town for lunch supplies because part of the deal was to feed our hay crew when they baled. I would be on jury duty the next day and not have time. I walked around the store in a daze, picking up bread and chips. I waited by the meat counter as she sliced the ham and cheese.

The next day I left for jury duty. It’s intimidating to go to court, with the chance you might not get there in time. The bailiff explained what would happen during the day as if she knew how disorienting it was to be yanked from your daily schedule and brought to a place with so much protocol that any misstep could land you in jail. At any rate, that’s how it felt to me. She lead us to the court room, which was a good thing because I got turned around when I went to the bathroom, and almost walked into a different room. We were like people waiting at the airport, watching a game show, reading our phones or books. We traveled through a day or two together and then wandered apart.

I don’t have pictures for jury duty because we’re not allowed to take them in the court house. I wasn’t selected but found it a fascinating experience as the lawyers interviewed each person.  The defense attorney asked over and over do you accept that the burden of proof is on the prosecution? My client is considered innocent. He does not have to defend himself. Do you have anything against him? The young man sat facing away from us. He wore a white shirt. He seemed subdued.

The public defender asked each juror, “Do you have anything against me?” I was not chosen which is just as well because I might have said, “Yes, you need to tuck in your shirt. Do you care about the man you’re representing?  He asked each juror, “Can you make decisions? Decide between two differing views?”

I was not chosen, which is just as well, because I would have said I can decide but not what we’re having for dinner or where to go out to eat.

Harvest is hard work. I’ve been thinking about Jesus asking us to pray because the harvest is plentiful but the workers are few. It’s hard work to put up all that hay, even with machines, or pick those tomatoes, scald their skins off, and freeze them.  Even those twelve row combines take hours to scoop up a field. I thought about Jesus’ harvest, the hard work of gathering people, who don’t seem to want to be gathered.

This year is the first year I’ve noticed apples on the tree by our house and acorns under our trees. Bruce says he’s seen them before but I’ve not noticed them until this year. (And I would notice because I would feel them crunch under foot when I walk the dogs.)

Beaux finished up after dark. The moon a crescent in the sky. I took fifty bales off this cutting and sent the rest of my share with Beaux to sell to a friend. His family joined us that evening to finish the job. All the trucks pulling in to help us lifted my heart. I thought we’d joined a Ford or Chevy commercial.

Bruce calls making hay a fiasco because something goes awry. This time the pasture was baled after dark, the hay damp from the night. He said he’s tired of making hay. I can’t blame him. But I call it a miracle because for ten years help has shown up, even if we don’t know if help will arrive that morning. It’s a miracle because we’ve picked weeks with dry weather. And we’ve got Beaux helping us. He cares about making good hay because he is selling it, and he finds people to put it in the barn, which is grinding hard work. We can take what we need, and not break our backs putting 700 to 1,000 bales in our barn, and then handle it again when we sell it.

Our pastor talked that weekend about how the harvest of righteousness is sown in peace by those who make peace. I thought about making hay, picking up each bale, strings cutting through gloves, hefting it into the loft. I thought about making peace now, even though we are so riled peace is the last thing we want. This week lines from an old hymn, “They Cast Their Nets in Galilee” came to mind: “The peace of God it is no peace, but strife wrapped sod, yet, brothers, but pray for one thing, the blessed peace of God.”