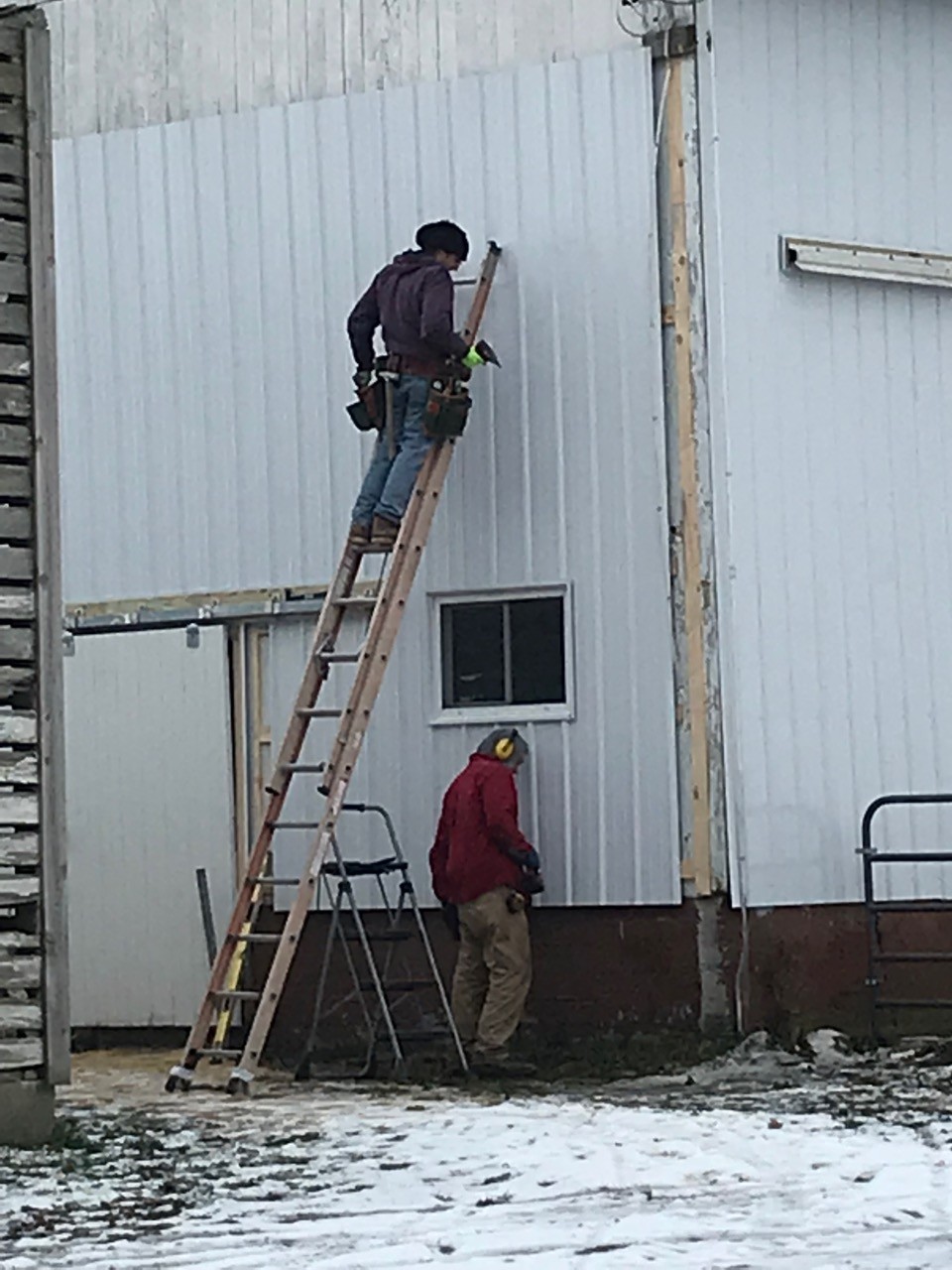 More Men at Work on our Farm

A few weeks ago the farm came alive again with men working. Bruce looked at the barn, paint chipping off every time it rained, and said he didn’t want to paint it again. The first time he painted it, he scraped the whole thing. Then painted but he could only go as far as his ladder reached. It took him all summer.

So we had to hire one of the itinerant painters who visits every year, offering to paint our outbuildings. He’d make us a deal. We agreed to have them paint the top part of our barn for $700. We weren’t surprised when that part faded faster than where Bruce had painted. A clerk at Sherwin Williams said a painter came in and bought a pallet of tint and eighty empty pails. No wonder they drive brand new pick up trucks. (I love looking at those trucks!) Their traveling the country painting barns and sheds, strikes me as an old, interesting craft. Like many country people, I imagine they have stories about the farms they paint, the people running those farms. Since the barn tint incident, Bruce has run them off before they can shut off their trucks. I cringe. It will be a relief when they pass us by.

We’d gotten an estimate from S and A Maintenance a year ago, so we had an idea how much it would cost. We felt their price was more than fair. I called before Bruce changed his mind. The price had gone up by $2,000 but was still reasonable enough for us to say yes, yes, let’s do it.

Even though we signed our agreement in August, it took until November for them to get to our project. Bruce and I had been pleased with their work repairing our shed door, which jammed so badly we could not get the tractor or trailer out. Steve and Andy, just the two of them, added new rollers without taking the door off. I was impressed by their cleverness and was impressed again. You can read about that story here.

At the end of October Andy stopped out to finalize measurements and said they’d be back in about three weeks.  It would take some time for the company in Amboy to fabricate the steel. Then they’d haul it back on a flatbed. That must be how they kept the price down because they didn’t go through a third party. I said that it was getting cold, that winter was setting in. Andy said they’d manage. It was no big deal. He thought they’d take less than a week.

Andy said it wouldn’t look like they were doing much at first. Though seeing the stretchers on the side of the barn they wanted to work on, seemed like progress to me. I was worried the horses would bother them, so I put the mares together on the side they weren’t working on. (Bruce just now said Alex said that Morgen was pesty when he worked close to the gate. Sounds about right.) This was the first time I’d put them in the paddocks together in five years. From hating each other so much they whirled their hindquarters, kicking to injure, they gradually learned to get along. I let them have pasture together for the last few years, and they’ve reached over the concrete trough to mutually groom each other.

Steve, Andy and Alex worked on the backside of the barn first. I held my breath as Andy measured the gates to see if they could move the lift into the back paddock without tearing out a fence post. Fortunately the alley behind the milk house was barely wide enough. It was like threading a needle as they moved it in, and they left it overnight until they were done.

They moved the sliding doors away from the barn so they would slide over the steel, using pressure treated lumber. I wondered how they would move the big barn door in the front. It was like magic how they were up on ladders, moving the door away from the wall, sliding lumber behind it, and putting it back. I’m still not sure how they did it, even though I watched.

They kept working when it snowed. Tessie looked pretty as the snow fell.

Then the backside of the barn was done. Morgen was happy to eat her breakfast.

Bruce commented on how Steve, Andy and Alex worked through the day. They took a lunch break but that was it. They hammered the siding into the studs, so it was firm. They fabricated the steel pieces, cutting them to fit the slope of the barn roof, and lifting along the side of the barn to the very top of the peak.

And they put the lights back on. Men who know how to make things, what tools to use, who work steadily through their days, work magic. Bruce works magic, while I climb into my head and make words, hoping they make sense and maybe touch hearts. It’s not the same, not as powerful as  making our barn look as nice as the house, or fixing a window sash, or making a step back cupboard.

Now our barn, paint chipped, has new clothes. We won’t have to paint it again and when we look at it, our eyes won’t hurt from seeing a barn that looks run down, the boards pulled away from each other. Our hay won’t be rained and snowed on. The steel roof doesn’t flap and twang in a stiff wind and Morgen doesn’t feel a draft swoping down from the hay loft.

I think about how we can put off our old person and put on Jesus, a theme that runs through the New Testament, and a mystery, how we die to our chipped paint and don the fierce love and light of Jesus. I’m not sure how to explain this exactly, except to say that we don’t have to go to the angry place or stay bitter or play the victim. We can choose how to respond. We died to those things in baptism, and were made alive to love, joy, peace by the power of the Holy Spirit. Like much of my faith, this is a mystery and a practice.