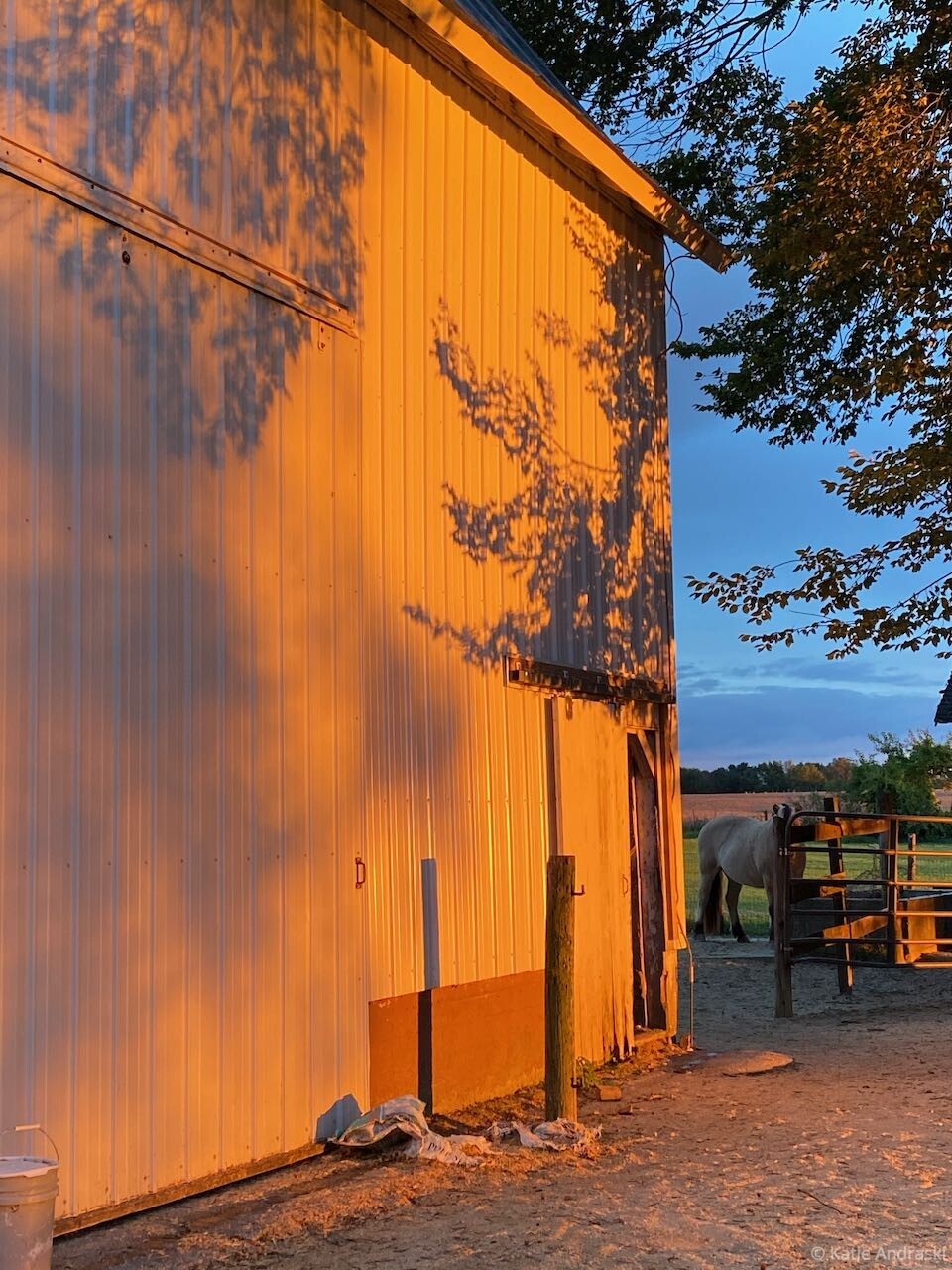 One Small Step: WNIJ Perspective and The Light of the World Stands at the Door

The day after Ruth Bader Ginsberg died, I joined a Story Corps One Small Step conversation while sitting in my writing chair, my books and sunshine behind me. I worried that my partner and I would get snarled in an argument. I’ve barely begun to understand what it means to be a conservative and don’t feel equipped to argue the finer points. Besides my mind goes blank.

The One Small Step Initiative invites people with “different political viewpoints to record their conversation in order to give people a space to get to know each other within a community and remember our common humanity. This represents one small step that may help disrupt the deep political divide.” I have been called a white supremacist, a racist, a Nazi sympathizer, criminally insane when I have offered my perspective. Polarization is not our friend.

Story Corps told Debra and I to talk about our earliest experience of politics. I remembered watching Kennedy’s inauguration and the riots in the 60’s. I knew very few black people until I taught in NIU’s Chance program while Debra went to diverse schools, pursued theater in New York City, lived in unsafe neighborhoods, and scraped by financially. We swapped stories. I heard the story behind her perspective. She heard mine.

Maybe we need more “can you tell me more?” and less arguing. Maybe we need to push surface politics away and know people are more than their opinions, our friendships more valuable than tossing them in the trash.

A Little More about This

Recently I was reading a thread on Facebook under a link about a rancher losing most of his cattle in one of the California fires. The gentleman said two lawyers he’d known since he was a kid came up to him and said there would be war on November 3. Since they knew him, even though he was a liberal, they’d watch out for him but they couldn’t guarantee his safety. The commenter was stunned by what they said. I am stunned that people are talking so boldly about how they’d respond if the election doesn’t go how they’d like. A plot to kidnap Governor Whitmer because of her extreme lock down measures was uncovered by the FBI and stopped. Already we’re seeing cities burning, sparked by George Floyd’s murder, but also sparked by violent resistance born of stay at home orders, a search for meaning, and rhetoric threaded throughout our culture that enflames us.

Occasionally I have challenged people on Facebook when they have used inflammatory words and have been stunned by the hatred coursing back. The same thing has happened on my own page when I have ventured opinions about politics. While I think it’s important to be an active citizen, learning about candidates, and voting, politics have taken too big a role in my life and I am working on pushing them down. I think about how Nero was in power during the very early church years, burning Christians on crosses. And yet the Christians were urged to pray for their leaders, that they might live peaceable lives. As a Christian I belong to a kingdom not of this earth and it seems as though political discussions just get in the way of loving my neighbor, their loving me. There is so much more to friendship than politics.

I have many progressive friends. It stings when they say something I profoundly disagree with. Mostly it’s the tone that stings, not so much content. Mostly I have learned to just keep scrolling. But the other day I called someone out on his post. We chatted back and forth on his thread. I’d offended him with assumptions. But he cared enough to send me an instant message and later delete our conversation so it wasn’t “a public spectacle.” We chatted over messenger about our views and I apologized for my assumptions. He forgave me for being less than perfect and understood that I trusted him enough to speak up. I wonder if conversations like these could happen between trusted people on instant messenger if something is . I also found with another friend that we had to beg off and not talk politics because we both got too wound up. But our friendship was so much deeper, and has so many more years invested than who we’re going to vote for. (Our choices will change, but we will still be here.)

Much has been said about how our bubbles are not good. But I think there can be a positive to being in a Facebook group of like minded people. I joined NRPlus, a paid Facebook group from National Review. They are conservatives but have a variety of ideas, so the threads are rich and interesting. I have learned what I think as a conservative, where before I didn’t have the reasons for why I believed a certain way. I can safely go to that group and vent or offer an opinion. I have been challenged at times, supported at others. Sometimes I just read and learn. Our rhetoric is respectful. We call out insults. At any rate this group has offered stability because I can scratch my political itch without the drama of speaking up on my own page or someone else’s.

The Light of the World Stands at the Door

One of the first things I do in the morning is open all the doors. I’ve shut the two in the room next to the horses because I think it’s good to keep them closed against critters and rain. If it’s warm I leave the doors near the horses open. I close them if it’s rainy, windy or cold. When the mares were fighting we set up gates so they couldn’t even share a fence line, because they bickered even with boards separating them. Eventually I saw they were grooming each other where there was a gap because of the concrete water tank left over from when there were cows here. Even in the house we took out as many doors as we could, so the rooms flow one to the other. The last time we had a guest we left our bedroom door open so the dogs and cats could come and go as they pleased and so I could sleep. I don’t like closed doors.

There’s a popular Biblical saying that describes Jesus standing outside the door of our hearts. There are famous paintings with a chesnut haired Jesus leaning towards a door, his hand raised. “Behold I stand at the door and knock. If anyone hears my voice and opens the door, I will come into him and eat with him and he with me” (Rev. 3:20). This is a favorite verse for children to memorize.

But the context is more fierce and more comforting than one would think. Jesus is addressing the angel of the church at Laodicea. It is his final address to the spirits of the seven churches. These letters are probably the most understandable and pointed sections of The Apocalypse, which, ironically means unveiling. He calls these Christians so lukewarm, he would spit them out of his mouth. Seems like many of us are like this. We are neither hot nor cold as far as our faith goes. We go to church, read our Bibles, check off the Christian boxes, but do we love God for Himself?  Jesus continues with a description that sounds like many Americans, “For you say I am rich, I have prospered, and I need nothing, not realizing that you are wretched, poor, blind, and naked” (Rev. 3:17, ESV). Even in the early church, the time of Nero, there were people who were as self satisfied as we are with our material comforts and the ability to order something on Amazon and have it show up the next day. In other words we don’t even have to wait for some material wants to be met. But these days it also seems as though we are quite aware we are teetering on the edge of wretchedness with the hatred that sparks when someone with differing views speaks, our fears of Covid and Climate Change, along with a looming debt, and the hunger of our neighbors whose businesses have shuttered due to the shut downs.

I’ve been reading the prophet Jeremiah because it’s a story of one man’s relationship with God and it’s a story of how a culture comes to the end of itself, as the people of Israel are taken to Babylon.  The heart cry of God can be summed up in the following: “Be appalled, O heavens, at this, be shocked, bet utterly desolate, declares the Lord, for my people have committed two evils: they have forsaken me, the fountain of living waters, and hewed out cisterns for themselves, broken cisterns that can hold no water” (Jer. 2: 12 -13, ESV). God is grieving over people who aren’t much different than us, who chose to dig dry cisterns, whose water would be stagnant if they worked, instead of  drawing on the living, clean water that is God.

But Jesus doesn’t just leave us condemned. He offers “gold refined by fire, white garments so that you may clothe yourself and the shame of your nakedness may not to be seen, and salve to anoint your eyes.” I have often prayed for what he offers, because I know I have been blind, often misperceiving people, the world around me, and even God Himself. And naked psychically, by sharing way too much of my pain with other people, without listening to theirs. And much in need of the gold refined by fire. God’s presence Himself is a fire cleaning us up.

He says that those he loves he reproves. There is hope when he says this. It’s his love calling us out.  Then he offers the grand  invitation, that if we’d open the door, he’d sit down and eat a meal with us. We get to have that meal every time we take the bread and wine, the body and blood. We take Jesus into our bodies, and there is a communion that is as intimate as food being digested and feeding us on the cellular level. We change and become like Him. The light of the world enters our bodies. I think of the glory that was so wild that a priest reaching out to steady the ark of the covenant was struck down dead. I think of the back parts of God when Moses talked with Him on the mountain, and Moses came down from the mountain so full of light that he terrified the people, and Moses was flesh and blood, just like them. That light lives in us. He frees us from how we fall short of who we could be, and remakes us into that person. He is so wild we can call him Daddy. All we have to do is open the door.