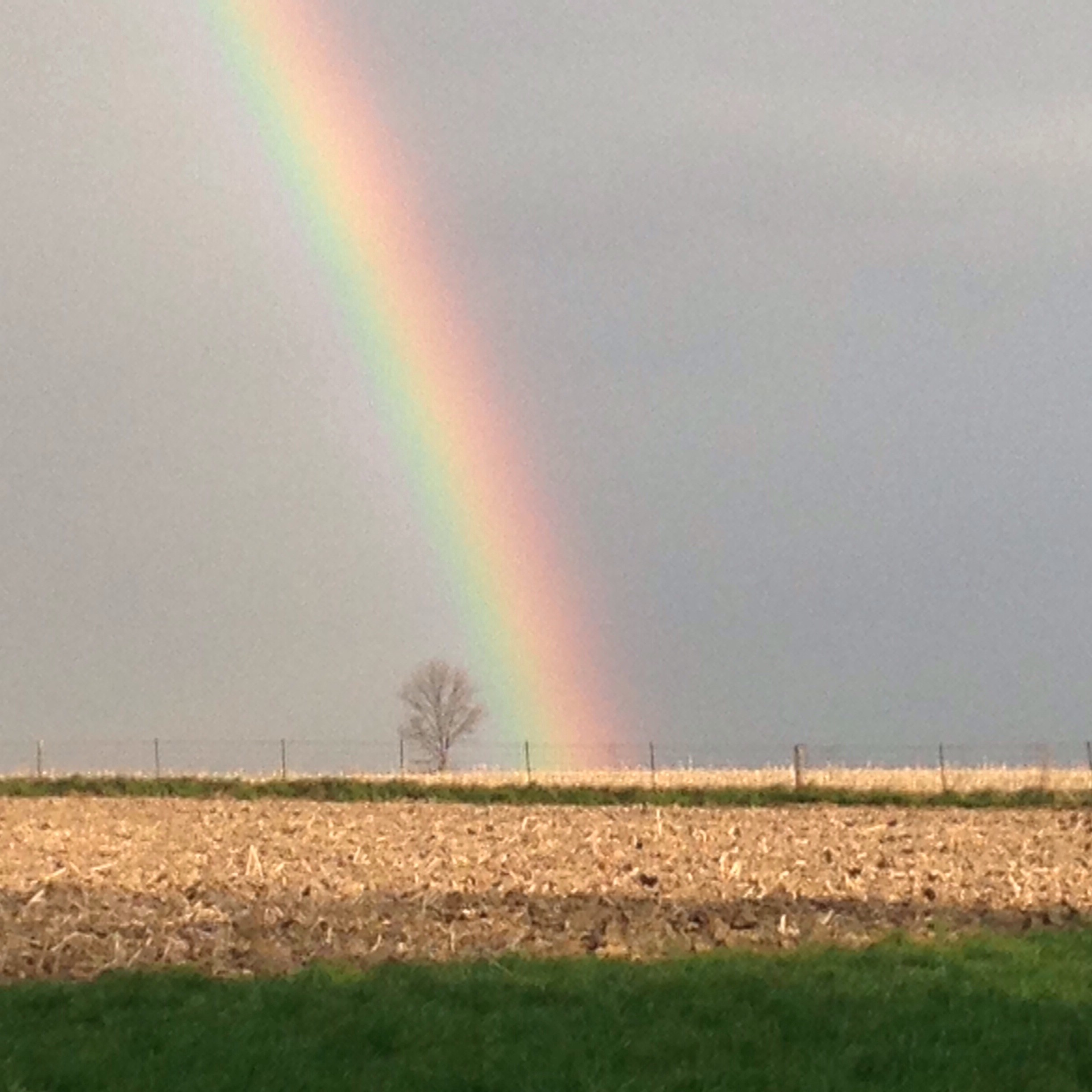 By Katie Andraski May 22, 2015 Reflections on the ground, Spirituality, Uncategorized
4 Comments

“It’s raining to the east.  You might see a rainbow,” said Candace King our local weather forecaster. I picked myself up and went outside to do chores. The day was cool and water dripped. I turned to the faucet on the side of the house to fill up water buckets, and when I turned around, I saw a rainbow bowing over our barn, as bright and clear and colored as I’d ever seen one.  Bruce did you see the rainbow?

The rain only dripped as I walked forward snapping pictures. Tessie looked at me through the slats in the fence and Morgen stood at the gate waiting expectantly for me to come play with her.

I decided to reread Revelation after  being terrified to read it this past Lent. There are so many echoes in today’s news that show up there, I wanted to see what I could see. But it was like reading a real life disaster story, with God bringing out war horses and bowls and ferocious angels holding the four winds and pouring out all kinds of trauma on the world. In one spot the whole earth shakes with an earthquake and mountains are flattened. People beg mountains to crush them because God is so terrifying.

Though a person has to wonder how many disasters we can blame on God’s wrath because we’ve done enough to hurt the earth ourselves. When the stars fall out of the sky, I have to wonder about all the space junk buzzing around our planet and when a third of the ocean turns to blood I wonder if it’s an image for Fukushima pouring radioactivity into the Pacific or even the warming ocean decimating the food chain. The honeybees are dying, which might be cause enough for famine, let alone drought and the poison we pour into our fields year after year. Who knows when they will bonk and stop producing?

The second time around I wanted to to see if there was more hope than my upbringing in the terrors of Christ’s return allowed. I wasn’t even out of grade school when I sat at Word of Life Bible camp studying how Jesus would pick up every last Christian to meet him in the clouds, and then wallop the world with disaster after disaster. Then Jesus would ride a white horse and fight the armies of the world in the last battle of Armageddon. Blood would flow as tall as horse’s bridles. Then there would be a thousand years of peace. I watched the Bible teachers draw out the time line summer after summer, so that it became embedded in my understanding of the end. I own an original edition of Hal Lindsey’s Late Great Planet Earth. It all seemed to make perfect sense with the Seven Days War and our ability to nuke ourselves many times over.

But by the time I was a teenager I’d become a pan-millennialist, someone who believed it would all pan out in the end, but who knows how? But that early teaching was embedded. It’s hard not to see the world in terms of a coming tribulation, though some writers say the predictions have already happened. I pulled out the commentaries, one The Concordia Study Bible and the other one The Orthodox Study Bible. The Orthodox Study Bible makes the most sense by saying,”John’s vision was first of all a reminder from God to the churches not to give in to their adversaries, but to hold fast to their faith. The book can also be seen as prophecy addressing a time far distant from its era of composition, predicting actual future events; or an exposition of the ongoing relationships and conflicts between God and His Kingdom, humanity and Satan. These three approaches are not contradictory but complementary; all are valid.”

In the chapter after Jesus rants at the seven churches, telling them what they have done well, how they have failed and what he is going to give them, there’s a remarkable poem that talks about God’s throne. Around that throne is a rainbow like an emerald and four living creatures with faces like a man, an eagle, an ox and a lion and amazing images: Lightning and rumblings of thunder. A sea like glass. Seven lamps burning that are the seven spirits of God. (What? I thought there was one, the Holy Spirit.) Twenty-four elders with thrones and crowns.

What I saw was how God honors the animal kingdom by the place he gives these creatures. And to my eye they are roughly the different classes of animals we see in the world–human, bird/reptile/predator/prey. They have six wings and eyes all over their bodies, so they see everything, from every angle. They are grotesque and resonate with the creatures that Ezekiel wrote about. The elders bow down and worship when the creatures “give glory honor and thanks to him who sits on the throne and who lives forever and ever.”

I kept wondering if John was in two places at once–observing the whole terrifying scene and sitting as one of the twenty-four elders, since they are supposed to represent the twelve tribes of Israel and the twelve apostles. Didn’t Jesus say that it wasn’t up to him who would sit at his right or left hand when John and Peter were squabbling about power in the Kingdom?  I’ve been taken aback that John was knocked out as one dead when he saw Jesus in these visions, glowing hard like burnished bronze, because John and Jesus were best friends when Jesus walked this earth.

When I was a kid I thought that rainbow had to do with the rain backlit by the sun,spraying into a prism that rounded over the circle of the earth. I knew the story of Noah. The emerald rainbow is a small detail in the description of the throne being surrounded by thunder and lightning and a rainbow. But the commentaries said that a rainbow has to do with God’s promise, that he would not pour out judgement on the earth and destroy it by a flood again. And that rainbow surrounds God’s throne, an image of rule of judgement. Paul has written how wide and deep and broad and high God’s love is. “And I pray that you, being rooted and established in love, may have power together with all the saints, to grasp how wide and long and high and deep is the love of Christ, and to know this love that surpasses knowledge–that you may be filled to the measure with all the fullness of God” (Eph. 3: 17b – 19, NIV). He has said that our judgement will be about commendation, not condemnation. “It is the Lord who judges me. Therefore do not pronounce judgement before the Lord comes, who will bring to light the things now hidden in darkness and will disclose the purposes of the heart. Then each one will receive commendation from God. (I Cor. 4: 1 – 5 NRSV). So maybe this judgement that seems so fierce will be in that it will clean us up from our failures and lack and cruelties but it will also commend us.

The chapter ends with a doxology of praise to God for creating the world, “You are worthy, our Lord and God, to receive glory and honor and power, for you created all things, and by your will they were created and have their being” (Rev. 4:11, NIV).

If you’d like to check out my novel, The River Caught Sunlight, you can find it on Amazon and Barnes and Noble.