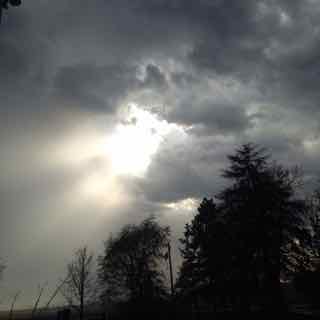 Revelation, the Hadron Collider and the End

For Lent I decided to read Revelation through like the wild, apocalyptic narrative it is, you know, like science fiction, not trying to figure out what every verse means. I read it like reading a collection of poems without trying to parse meaning. I wanted to browse through image and language, like you might a glorious store and see what I pulled off the shelf. I opened it because it feels like we’re butting up against the end of the world, what with ISIS beheading all kinds of people, saying they want to bring on the end of the world, and our genetically engineered food, our violent weather and earthquakes. I wonder about all the people my country has murdered to protect me.

Right now Hadron Collider has captured my doomsday imagination.  Basically this is a machine that uses magnets to shoot protons down a long tube in order to smash particles. A couple Woo Woo sites arrived in my newsfeed and I took the bait, maybe because there might be something to what the conspiracy theorists are saying. There was just the right mix of wild spirituality and science to grab me.  They asked questions like, “Isn’t it odd the machine has been fired up on Equinox, the same day a solar eclipse slid across northern Europe? When this is a day highly revered by pagans? And what about all the images of the Hadron collider showing up in commercials for the NFL, Super Bowl, CBS and chewing gum?” Both this season’s Dancing with the Stars and American Idol had stages that looked eerily like the Hadron Collider, which even I find odd. (I know, I know, they probably hired the same designer.) Why is popular media trying to condition us to these images, to the idea this machine might be a Stargate?

Scientists are trying to replicate the moment after the Big Bang. They want to smash the Higgs boson, the supposed God particle, to discover what the story is with Dark Matter, something that makes up 96 per cent of all the matter in the universe, but something not visible to us. Stephen Hawking is supposed to be deeply concerned that this experiment could collapse time and space. He says it could create an instant vacuum that would instantly stabilize the universe and destroy us all. The Woo woo types don’t mention the second part of what he says which is the particle accelerator would have to be the size of earth to make that happen. Why ever would we want to make a black hole, something whose gravity is so powerful, that light can’t get away, even a tiny, tiny, tiny one? The Woo woo types wonder why we’re trying to reach another dimension. They say the last time they fired up this machine, supernatural beings, as in angels and demons, showed up in the vicinity. And last autumn somebody’s angel said they were not a little concerned about this experiment, that humans could destroy the universe. (Facebook is full of fun stuff, that can tickle the imagination, even if it’s way, way out there.)

I feel like I am reading CS Lewis’ That Hideous Strength, remastered.  Maybe I’ve read too much of Revelation or my own fear has grabbed onto this imagination of a doomsday theory, but it seems to me these scientists are messing with fires of creation. For what? Just to satisfy this driving curiosity? To open a door to another dimension? And if we do open the door, will we be inviting some kind of other dimensional kudzu that will infest our planet with a weed that doesn’t belong? There’s a odd reference in Revelation that says the door to Hell will be unlocked and Satan allowed loose rein after Jesus’ thousand year reign and then he will be thrown in the lake of fire, forever. Could this machine be that key?

What if the tree of knowledge of good and evil includes this drive to know things, even when we shouldn’t. We’ve genetically modified plants and animals. People can have babies without a man putting himself in a woman. Genetically modifying plants so they can tolerate herbicides and environmental conditions seems to be killing bees and poisoning us. Even social media has outpaced our wisdom to use it, and is hooking into our brains, rewiring them, breaking and making community. Maybe it’s this drive to know that has separated us from life and from God because we don’t know when to stop.  Maybe God’s warning, “In that day you shall surely die,” also talked about this, how in our search for knowledge we can find new ways to die along with ways to heal. Maybe there are some things that are better not to know. Maybe smashing the Higgs Boson is one of them.