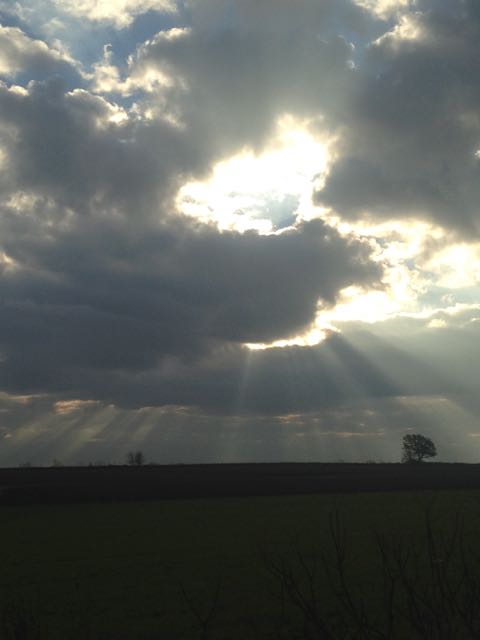 The Wonders of His Love

“Blessed be the Lord for he has shown me the wonders of his love in a besieged city.” Psalm 31:21.

A besieged city: Chicago where a warning went out not unlike a severe storm warning about a gang war started because of the nine year old child killed, because of the model killed. The address was specific.

None of these cities are surrounded by an invading army, but they have been, no, we have been infiltrated by fear and hate. It threads through each one of us. Jesus said that if you’re angry with someone, you’ve committed murder. He said it straight because most of our nastiness starts with bad thoughts, some kind of outrage.

But anger can be the first thrust of grief. And it can stay with us, because it is easier to be furious than it is to cry, and easier to cry than to feel the hollow that will never be replaced by the person we lost. Sometimes I wonder if some wars are rooted in grief turned to revenge. Families seem to break after someone dies. I know mine did. I wonder how there can be world peace if we can’t even make peace with people we know.

At any rate, how does God show us the wonders of his love when we are besieged?

All I can think of was this morning’s sunrise, the bellies of clouds painted purple, and the miracle itself of the world turning, another day beginning. I  think of the constellation Orion, that I look for when I take my dogs out. I’ve seen him swollen and low on the horizon, jetliners flicking into the sky like bees over by O’Hare. And Orion higher in the sky, standing over our barn, like I might stand over Onyx, reaching down to stroke his head. And there are the squirrels who run to the very tips of the top branches of the Elm tree like they are jogging paths. The horse trotting to the fence asking if I’d come, tend to her.

I wonder if neighborhoods might band together to feed and water each other, if they become Mr. Rogers’ helpers, or if they go after each other’s throats because resources are scarce. Even here, and we are well fed, we are sharply divided over what to do with the Syrian refugees. Some feel empathy should win out. They challenge the Christianity of the people who see young men coming, an invasion by people who might not assimilate to Western values. We are at each other’s throats and forget that maybe we might need each other.

There is also a great gift when we are powerless. When I am feeling besieged, trapped by deep grief, I think of how Jesus said God was closer to the guy who said Lord be merciful to me a sinner, than the guy who felt good about himself. I feel Him, God, drawing close to my crushed spirit. I feel that prayer like breath and a quiet that is like a warm slate floor, why down underneath the grief.

Even the Psalmist says earlier, that his eyes, “grow weak with sorrow and his soul and body with grief.” He describes a place where I have been: “I am a dread to my friends–those who see me on the street flee from me…I hear the slander of many; there is terror on every side; they conspire against me and plot to take my life” (Ps 31; 9 b, 11b, 13). And also how a kind of cave springs up around us, that muffles the gossip because there is so much rock between us and them, that lets us heal because the Creator God has said he is drawing near, closer than a brother.

I think of Stephen the martyr who saw Jesus sitting on his throne as he was stoned to death, joy and light filling his face, and Paul’s joyous declaration, “For me to live is Christ, to die is gain.” In other places Paul talks about being beat up, ship wrecked, in a world of pain, but still, somehow finding joy, the drive to stand up and preach the good news again. (There had to be something powerfully good that we may be missing when we think “Good news of Jesus Christ.”)

I think of the children who stood up, faced the barrel of a gun here in the U.S. Are you a Christian? Stand. I think of the second, third and fourth shot. There are the men kneeling by the Mediterranean, quietly praying, full of dignity.  I wonder if I would have that courage. I wonder if God shows up, reaches out his hand. I wonder if I will be delighted to finally see the Lord I’ve loved all these years. But I wonder if I will reach my hand through fear and stand up to the loaded gun or knife at my throat and say like Jesus, “Lord forgive them.”

I can only hope that I will see, no, I have seen, like the writer of this psalm, “How great is your goodness which you have stored up for those who fear you.” The wonder of that sun rise.