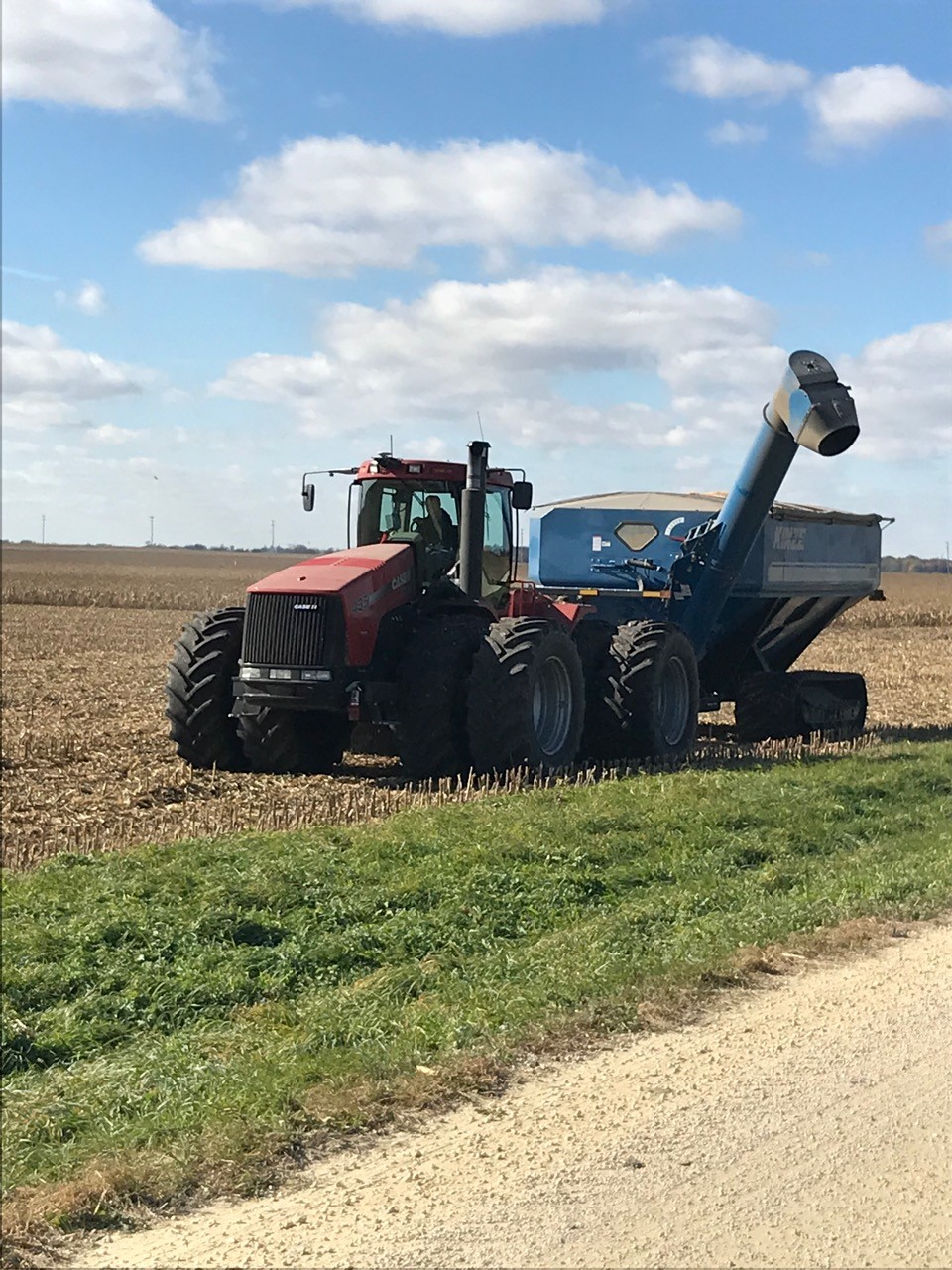 By Katie Andraski November 15, 2018 Farm, Reflections on the ground
No Comments

It’s been a long harvest this year, with crops around here not dry enough to pull out of the field when we had our dry spell. Unless you’re making silage, corn, beans, wheat need to be dried out as in dead, mature, done growing. The longer a farmer can leave their crops dry in the fields, the less expensive it is for them to fire up their dryers to bring the grains to the required dryness required by the mills.

Rain storms have kept farmers out of their fields. Again and again we’ve had rain. Combines don’t do well in the mud. A couple years ago a friend showed me their combine mired hub deep in a wet spot. The driver didn’t realize how deep it was. She said they worked it out carefully. I’ve seen pictures of combines pulled in two, the mud holding so tightly. But this fall the rain has been so common, we’ve seen fields rutted with men trying to pull harvest out of their fields, despite the wet ground. A freeze is coming which should tighten the ground, so they can finish.

In the past we’ve seen soybeans picked up so early, farmers planted winter wheat afterwards, and it would get a good start, a lovely green carpet poking through the snow. Then in the spring winter wheat can be picked early enough a farmer can plant beans after it’s harvested.  Last spring was so wet, planting came late. And now autumn is wet, what the weather people call an active system. The beans are a dark taupe and breaking in the fields. Corn stalks are cracking. The price of beans has dropped because of the trade war. My friend said China will never buy our beans again. And some farmers are storing them but they don’t store as well as corn. One neighbor told me he was going to wait and see what kind of deal Trump could finagle before he became disgusted.

We’re not big grain farmers. Our crop is hay, three cuttings put up or sold, but I am uneasy with the mussed up nature of the fields around here. I guess that urge for orderliness  is like the Marie Kondo urge to get rid of clutter. I long for fields to be cut back, clean. And I hope for my neighbors to get a good paycheck.

I watched the corn grow from barely poking out of the ground to stalks as high as a story, proud, green, poking the sky. I watched ears belly out of the stalks, and tassels like tiaras as I walked the dogs. And now watch them bend and break because of rain and wind. I want the weather to calm down, so they can gather their fields. If I feel this way, I wonder how my neighbors feel, trying to catch dry days between rain storms, to gather the harvest.  I wonder if their beans are moldering in the fields.

I think of Jesus saying, “The harvest is plentiful, but the laborers are few. Therefore pray earnestly to the Lord of the harvest to send out laborers into his harvest.” Even when the weather is dry, it takes days, even with big machines to collect the beans and corn. I think about this prayer, how I don’t pray for this or wade into the harvest myself. I think about the young family that told us about people who know Jesus in Peru, but their pastors don’t have seminary education to guide their people, how the need is nearly greater than their team to train them.

Bruce is waiting to burn our papers and brush because it would be no good if we set the neighbor’s field on fire. And I’m looking forward to the view down the valley, to seeing Dale’s place and watching the train’s head lamp begin miles away and move slowly across the land.

I remember farmers being done by Halloween, and I remember their lights settled in the field across the way, a cold front bearing down on them. I remember hearing how farmers competed with each other to see who could bring in the harvest fastest. And seeing the Hunter moon rise and fall over well clipped fields. But when I was a girl I’d ride in the combine during winter break, snow along the ground. I’d watch the cornstalks sweep into the header and wrote a poem:

She Thinks of His Work

The man is picking his corn in New York,
He’s buried in a combine munching its way
along a field until Orion stands
liquid as stars in a cow’s eyes.
He drives until he collects the whole field.
Floodlights shove the night back.
The machine devours cornstalks standing
–the women who minced with their gold.
When the combine spits out corn,
he locks the machine’s mouth
until he can pour out gold teeth.
No matter how cold it is, he opens the door
to hear his wealth chatter.

Jesus talked about wheat and weeds planted together and warned we should leave them together until they are gathered and separated. These great combines separate the wheat from the straw, the corn and beans from the stalks. In the Daily Office we are reading through Revelation and came across that famous passage where the earth is ripe and an angel reaps it–what some people think is God pulling his people out of an earth that will be plundered by his wrath.

“Mine eyes have seen the glory of the coming of the Lord. He is trampling out the out the vintage where his grapes of wrath are stored. He hath loosed the fateful lightning of his terrible swift sword. His truth is marching on.”

The next reaping is a picture of a man pulling grapes from a vine and crushing them in a vat and the blood up to horse’s bridles for nearly two hundred miles.  These are terrifying images.

And yet when the bowls of wrath are poured out–a sun that scorches the earth, poisoned waters–there’s a refrain–but they would not repent, they would not turn back to God, away from their way of living. God’s wrath is a terrifying thing, and yet, it’s driven by love, by His trying to catch people’s attention to turn to him. There’s heart ache in that refrain–they would not repent of their deeds. There’s heart ache when Jesus warns the people who are listening that they will be locked out because they were “workers of evil.” And yet, He also says, “And people will come from east and west, and from north and south, and recline at table in the kingdom of God” (Luke 13: 29, ESV).