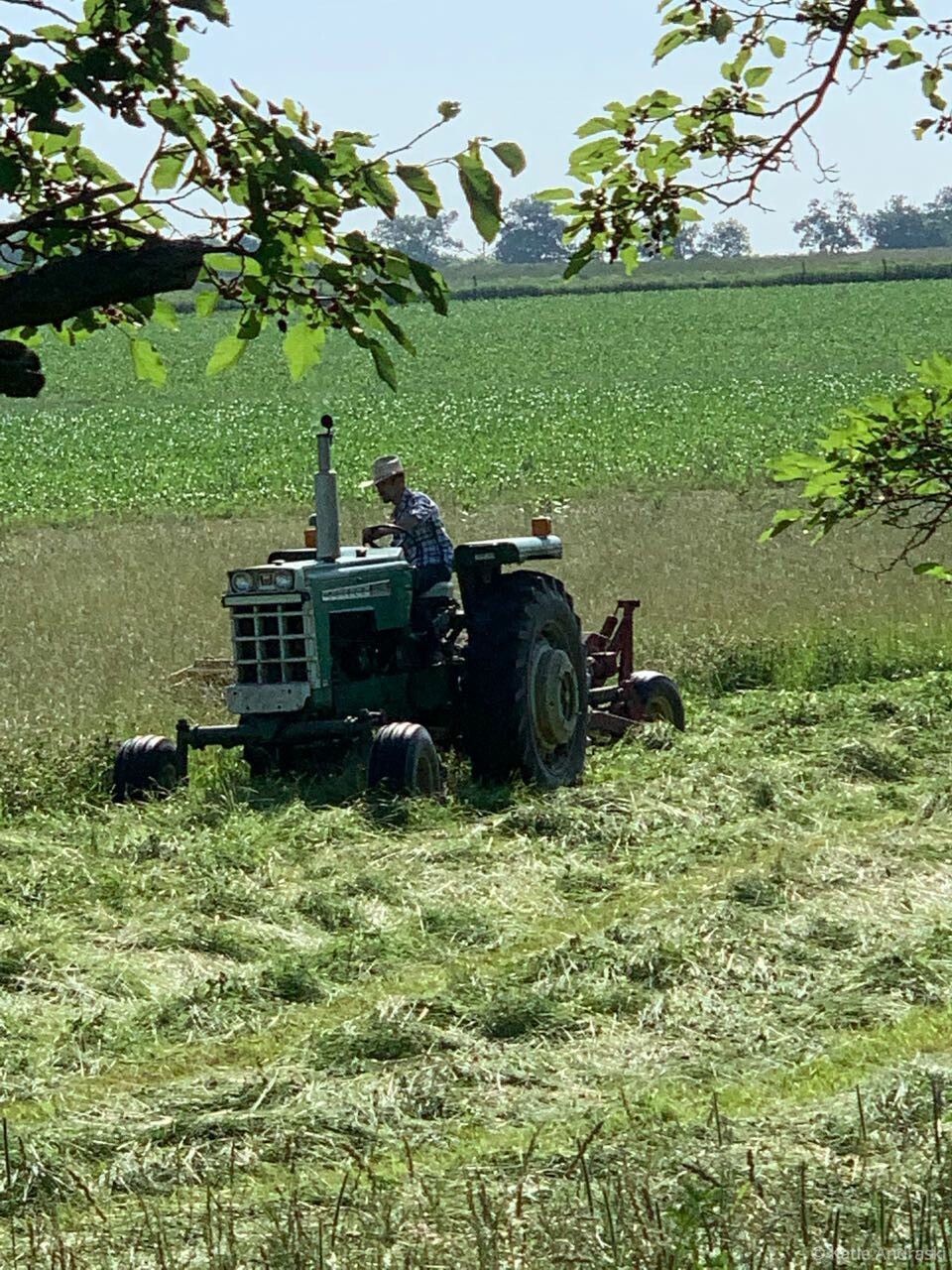 In the days before we cut our hay I remembered how I used to run into our hayfields and flop down looking at the clouds and hay towering over me. Ants crawled on my skin. Mosquitoes landed. But still I looked up.

Beaux Fowler, our hay guy, called saying the days would be rain free, and hot. He has been a gift to us, taking the hay on shares–we get half, he gets half. He  has a vested interest in baling good hay and works hard at it. I admire his work ethic. He wanted to drop it. We were coming up on July 4 and the hay was growing from mature to brown and stalky. It had been a rainy spring. The first time he wanted to cut, the field was squishy wet. If you lay hay down on wet ground it won’t dry. And he’d rut the field. But I envied the people who dropped their  hay and put it up dry that week. A friend cut a part of his field high so the hay rested on the stalks and could air dry. They were nearly out of hay and needed it right then. It’s been an ugly year for all of us–with cattle people, horse people running out, and grain farmers planting late. We were fortunate, having put up more than we needed last year. (We fed the hundred bales left over from the year before.) But my horses can’t eat grass because they are fat, so enough hay is important.

We said, “Yes, let’s drop the hay.” The weather people predicted 0% chance of rain for the days we’d need to drop it and dry it. But it was a hot, humid week, clouds rising and dropping rain. The hay was rained on just after it was cut though we weren’t too concerned because rain at that stage was pretty harmless.

The hay was thick and beautiful. I guessed 1,000 bales. Beaux thought 750. Turns out the field produced 600 bales.

The  hay was so thick Bruce had to rake it by hand. I wish we’d thought to ask a neighbor if we could borrow his tedder, which is like a toddler throwing the hay around, spreading it out, so it can dry faster because the windrows aren’t so thick.

When Beaux was raking he moved fast. He had other fields to work on, so he turned it over to a young friend. But the tractor broke down, so he asked Bruce if he could rake. As he worked up and down the field, patiently, slowly, in the hot sun, three separate times, I kept thinking: this is love.

We tried to bale on Saturday but the hay was too wet, so we had to leave it for another day. Beaux said you don’t want to put wet  hay into the barn. At my childhood farm,  we opened both barn doors to let the air move through the hay we’d stacked. I stuck my hand between bales to feel for heat and found some, but it never burned down the barn. When we put it up, we pull the wet bales out and stand them by themselves or feed them first. Sometimes we’d get mold, though since we sided the barn, I’ve found fewer moldy bales than before. Often I hold it up to my nose and sniff before I feed it because it can look fine and smell off.

That Sunday morning I saw the storm way up in Northern Minnesota. I watched it all morning. Bruce went out to rake again. And I thought this is love, except when I told him to rake the pasture again. I had gone out there to flip the windrows by hand. There was beautiful dry hay threaded with wet, very wet, stalks. My leg ached and sweat poured out of me. Bruce gave me a look and went to rake. Later he said he had wanted to start baling.

The storm in Minnesota was dropping through Wisconsin fast. I wanted to call the neighbor to help us bale. But neither Bruce nor Beaux thought that was a good idea. But, but this is our shot at a good load of hay. People are needing it for their horses. I need it.

I wanted to shout at the storm to stop, slow down, move east. I believe we have this power in us, the power that raised Christ from the dead, and told a raucous sea to shut up, sit down, be still. I believe when the EF 4 tornado was aimed smack at our home, people saw my post of FB and prayed, turning it north and fizzled. But what of the others who had hay dropped, who couldn’t bear a slow storm? I didn’t know how to take that power, hold my hand up. I felt silly even mumbling the words, “Lord make the storm stop.” It came on. A friend wrote on Facebook she thought people should agree with me and pray the rain stop. But they did not.

Bruce drove down to pick up the wagon and give them the empty one. We were racing weather. We pulled the wagon to the barn, lifted up the elevator and started unloading the wagon.

We put about twenty bales in the barn before the rain busted loose. Bruce backed the wagon into the shed to keep it out of the weather. The rain didn’t last long but it rained hard. When it was over we took the elevator down. Beaux threw the six bales or so off the other wagon to bale again. (I picked it up later and brought it into the barn to feed the horses.)

It rained three more times. Bruce raked it again. This is love. And we gave up. Beaux said that he had hay rained on many times. This was our first time in ten years. He had seed he’d invested in, but with the late spring he wasn’t sure he’d see his investment. Yes, yes but hay is short. What about your friends who need this hay?

Our grief was tiny compared to the gut punch farmers have felt this year from cattle dying in floods earlier this spring, and fields still flooded. Bruce said his friend Gene said there are thousands of acres still under water in Rock Falls. Many fields by us have sprouted healthy crops, the corn and beans crackling with growth in the hot humid days. Many have sprouted weeds.

We gave up on the hay. Another storm was moving in. Beaux said, “Let’s just give it to the neighbor who has cattle.” Bruce and I agreed. We did not want those dead windrows stopping the second cutting from coming. And I didn’t think my horses would eat it, even if we could get it properly dried.

We called Craig, our other neighbor, who agreed to round bale it. Bret, the cattle farmer, said he’d pay Craig. He was glad to take it. He said it would feed his hundred cows for eighteen days. Bret came over and picked it up before the next storm moved in. Maybe we were an answer to their prayers since hay was so short.

But I was filled with regret we didn’t wait out the weather. The weather shifted from weather like Florida–hot and humid during the day and rain in the evening, to a drought. The weather guys began saying we need rain. The corn has leapt up from a few inches to shoulder height. We can almost hear it growing, its leaves stretched up like charismatics reaching for God.

But the regret burned. It’s a terrible feeling. You want to take back the days. Take back the decision to drop our hay and wait until the dry days came. Cutting hay is a gamble but it’s also a waiting game. We have waited until July 4 and after other years. The weather guys don’t seem to get their predictions right. We didn’t read the signs that hot and humid sucks as drying weather. Other friends mourned with me. People more experienced than I dropped their hay the same week, had it rained on. I think about that awful saying of Jesus, about outer darkness and gnashing of teeth and how this regret, this wishing we could go back, do things differently, feels a little like that. I wonder if the gospel wants to save us from that being so outside the party, we gnash our teeth with tears. I sometimes think that’s what soul deep repentance feels like.

I wonder if I’ll feel deep regret for frittering these early years of my retirement as far as writing goes, though more and more I think it took as long as it took to heal from the creative productivity in the years leading up to buying the farm. I have a several hefty drafts of novels and memoirs. And the hurt and disappointment over how publishing the novel turned out, was also a grief. It’s hard to let go of the dream of being traditionally published, of your work being wanted so much, publishers fight over your book. But the whole industry shifted as I revised that novel. In some ways it’s better now because there are no gatekeepers except the crowds of other books being published. I feel the air easing, cooling, like I can think again, like I can hunker down and shape those drafts put them out there.

I’ve thought of posting those drafts here, or podcasting the novel here. (What do you think of those ideas?)

If you’d like to read my novel, The River Caught Sunlight, it’s available on Amazon here.