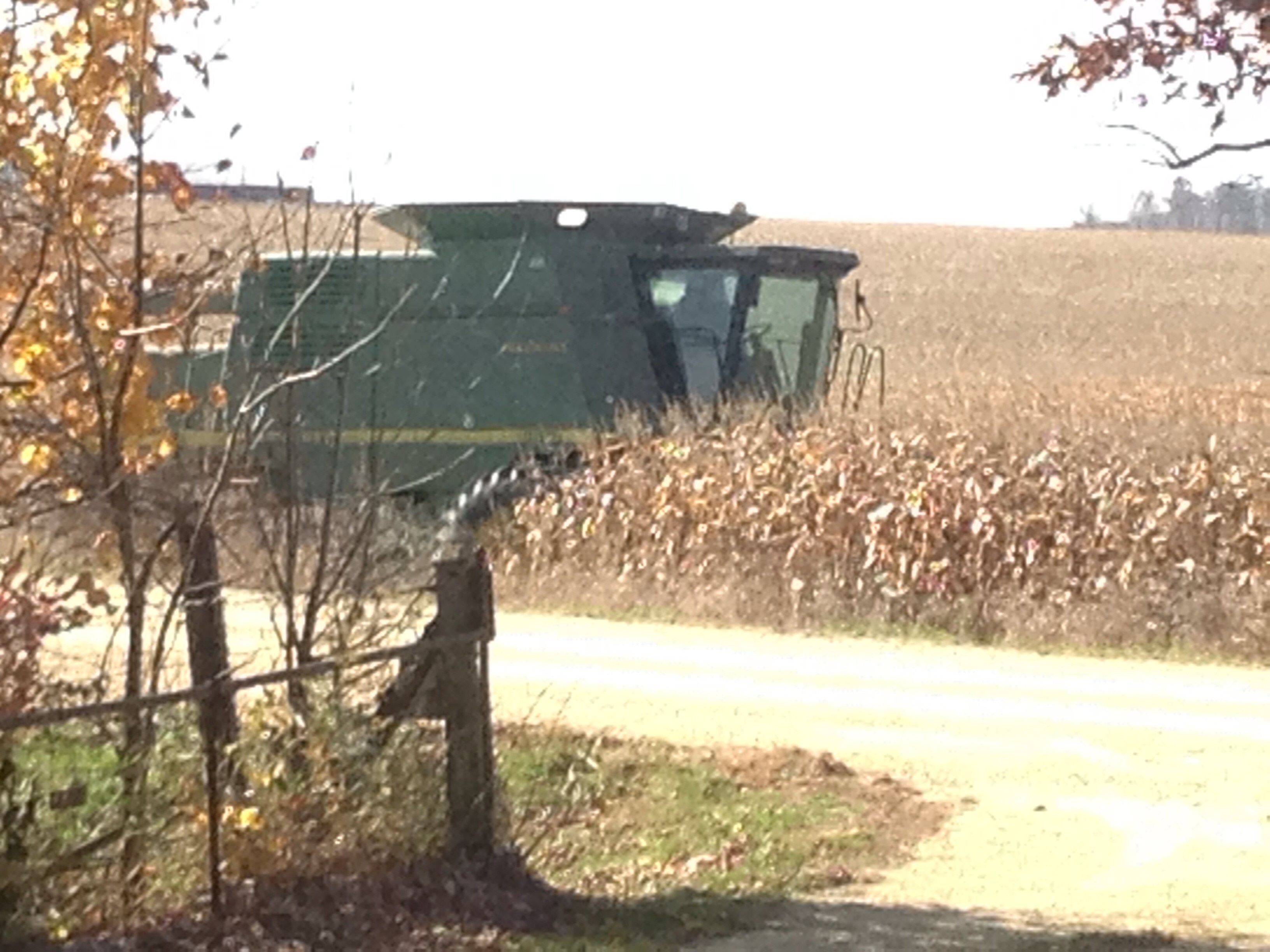 Back in October, the combines were buried in the corn, moving slower than I’ve ever seen them, the corn taller than the cabs. These huge machines waded in slowly, look like they might drown. Our neighbor said it’s a bumper crop, 220 bushels an acre, one six acre field up to 237 bushel. The combines sometimes pour out their corn while the grain cart follows them. These days those carts are big as houses and not legal to drive the road, all filled up. Sometimes the combine stops and pours out the corn.

I think about this harvest, how it would feel if the corn were scarce, if the combine rolled through quickly, picking scattered stalks, so few it’s hardly worth the loan to pick it up. I think back to planting, to what would happen if our neighbors lost their desire to scatter the seed, if they let the ground lay still, because they’d lost their dream, their work. Or if the rains stopped.

I wonder this because I’m reading about how success isn’t such a good thing. If you applied that to farming, we’d all starve.

Winn Collier said in a recent blog post there is much danger in looking for success. “A publisher once asked Thomas Merton to write a piece on the “The Secret of Success,” and he refused. ‘If I had a message to my contemporaries,” Merton wrote, “it was surely this: Be anything you like, be madmen, drunks, and bastards of every shape and form, but at all costs avoid one thing: success…’

Collier continues by saying, “I don’t entirely understand how to parse this. It is not as though failure is a preferred virtue. I suspect, however, that we intuitively know what Merton means. We know, in our age of unbridled ambition, how this way of being in the world rakes our soul bare. We know the pride and the vaunted hubris. We know that it wearies us. We know that we want something better.”

And Elizabeth Gilbert said recently that we should be careful of the voice of the ego, which tells us, “Nothing will ever be enough for the ego — not enough money, not enough praise, not enough shoes, not enough Facebook likes, not enough donuts. (He didn’t say the bit about donuts, but you get the point.) And when the ego DOES get something it wants (success, attention, a swimming pool), all it can do is crow about it.”

With publishing my book, I have had a hard time finding ground to stand on, so that I could do the work of putting the word out, giving it a chance to find readers. I feel like a pony being spurred forward and yanked back at the same time, my sides sore from the steel, my mouth in pain. Forward. Back. Where do I go but rearing up in confusion? My ambivalence with publishing The River Caught Sunlight has run deep, probably back to my family’s silencing ways, through my letting the dream to publish it die, deader than dead, so it’s been a work like unraveling grave clothes to wake up to it’s being alive, finding its way into readers’ hands.

I agree that success can undo us, but so can the opposite. I think of the writer of Proverbs who says desire granted is a tree of life, desire denied dries up the soul.

Parker Palmer in an article for On Being with Krista Tippett tells the story meeting Kassie Temple in the Catholic Worker Movement. He saw for himself the difficult people she worked with, their problems getting worse by the day. He asked her, “”How do you keep doing this demanding work, day in and day out, when you know you’ll wake up tomorrow to problems that are as bad or worse than the ones you’re dealing with today?”

Kassie replied, “What you need to understand is this. Just because something’s impossible doesn’t mean you shouldn’t do it.”

Palmer concludes, “While it’s important to be as *effective* as we possibly can in doing vital tasks, it’s even more important to be *faithful* to our gifts and the way they can help meet the world’s needs. When effectiveness is our only norm, we will take on smaller and smaller tasks, because they’re the only ones with which we can be effective.

“No one who has stood for high values — love, truth, justice — has died being able to declare victory, once and for all. If we want to embrace high values, we must find some way to hang in for the long haul. Faithfulness to our gifts is the only way I know. We will die with our big goals unachieved — just as Dorothy Day and Kassie Temple did — but with the satisfaction of knowing we gave ourselves to them as fully as we could.

I barrel towards rejection. It hurts I tell you to send out books, to media types, authors, who turn away, themselves too busy, to look at a little book from a small publisher who asked me to help with expenses, the risk. Some have said yes, they would help, but now that they own the book, they say no, I can’t. Or they don’t answer my message. They are setting boundaries so they can do their work. Sure it’s nothing personal, but it’s still a no, and there have been so many noes with this writing business, that I have been overcome, frozen, unable to try again. The life coaches say I’m likely a mere foot from the vein of gold.

Just this last week I spoke to 120 people between two events but only signed three books. Three. My publisher said sharing my experience with aspiring writers was priceless and Bruce said but in that reading (about the mountain and the lost sheep and the man rappelling down the cliff), “You preached the Gospel. I’d take that over selling books any day.” So that too, finding an audience, even if they don’t buy the book, is a satisfaction. After all, when I decided to publish this book, I kept in mind that this is like buying an adventure. I couldn’t expect to make money, but sending this book into the world would be an excuse to find readers, which has been a joyous, gentle thing, like giving a thoughtful present to a friend.

Years ago, when I was a girl, Tom Little spoke at our church. He was an eye doctor called to help people in Afghanistan see better. He said he didn’t think he’d win many souls for Jesus in the traditional, Billy Graham shouting an invitation with hundreds walking forward to make a commitment. At the time it was how our success as Christians was measured–how many people we lead to Jesus. Even then I wasn’t so good getting people to pray the “sinner’s prayer.” Little said it doesn’t matter how successful we are, but rather how faithful we are to the call. He worked in Afghanistan through the Russian occupation and after, through the American occupation until bandits killed him on a road into the mountains. He died when I was going through a particularly excruciating time as a teacher. I figured if he could follow his call to help the Afghan people see better, I could stand in front of my class, despite the mean voice in my head, saying, “You suck, You suck, you suck” and keep teaching my students how to write. Even now, his story has inspired me to not give up, to keep planting seeds, to trust timing and God to help me find my readers, even if they number in the tens, even if I don’t make the required several thousand copies sold, so I don’t have to pay my publisher to publish the sequel.